Video review: "Ant-Man and the Wasp" 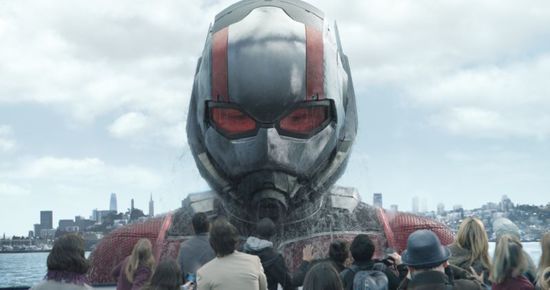 Some think the introduction of wholesale comedy into the superhero genre was a poor match with the generally dark tone of these films. But I welcome movies like “Ant-Man and the Wasp,” which aims for funny first, exciting second and perilous a far distant third.

After the shock-and-awe of “Avengers: Infinity War” and other flicks, we needed a dose of funny as antidote.

You may recall that Scott Lang (Paul Rudd) was a charming but loveable loser of a thief who suddenly found himself a super-hero after stumbling across the suit built by scientist Hank Pym (Michael Douglas). It allows him to shrink down to insect size, though gaining strength in the process, as well as command the bugs that bear his name.

His brief stint with the Avengers landed him on the wrong side of the law, and as the sequel opens he’s spent two years under house arrest. He’s determined to go the straight and narrow path for the sake of his daughter. But that all comes tumbling down when Hank and his daughter, Hope (Evangeline Lilly), come calling to recruit his help.

Hank and Hope are searching for their long-lost wife and mother, respectively, who was cast into the quantum zone 30 years ago while committing some derring-do. Essentially, she got shrunk down so small that she’s stuck in another dimension -- and they want Scott to go after her.

Hope has her own suit, which also boasts wings and several other add-ons, and goes by the moniker of the Wasp. Soon they’re a duo.

Spoiling the mix is the Ghost (Hannah John-Kamen), a young woman with the ability to phase in and out of solidity. Her aims clash with Hank’s crew, and she’s also being helped by an old science rival of his, Bill Foster (Laurence Fishburne).

Walter Goggins shows up as a villainous technology dealer whose role is to turn up whenever the plot slows down to kick off some more thrown-downs.

Rudd is his usual twinkly self. There’s something about the innate amiableness of the actor that just makes you want to smile. God help us he never wants to go down the “I’m a serious artist” path and start cranking out doom-and-gloom Oscar bait movies.

“Ant-Man and the Wasp” is just what it looks like: a purely entertaining film that won’t ever bring you down.

Bonus features are decent. There are gag reels and outtakes, deleted scenes with commentary by director Peyton Reed, who also offers an introduction. Plus there are four making-of featurettes: “Back in the Ant Suit: Scott Lang,” “A Suit of Her Own: The Wasp,” “Subatomic Super Heroes: Hank & Janet” and “Quantum Perspective: The VFX and Production Design of ‘Ant-Man and the Wasp.’”