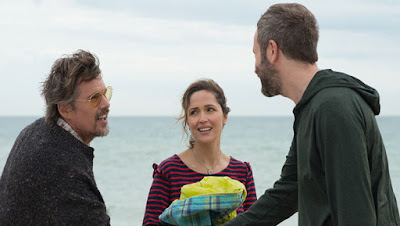 Just for the record: nobody doffs their clothes in “Juliet, Naked.” The title refers to an acoustic early version of a seminal album by Tucker Crowe (Ethan Hawke), a fictional indie rocker who stopped performing 20 years ago in this lovely adaptation of the Nick Hornby (“About a Boy”) novel.

A tape of the record finds its way to the doorstep of Annie Platt (Rose Bryne), a woman living in a quaint seaside British village. Her longtime boyfriend, Duncan Thomson (Chris O’Dowd), runs a website lavishly  devoted to the lost rock god. Annie had written some snarky comments on the site taking Tucker’s work down a peg or two, and the man himself writes her to agree, along with the tape.

A correspondence soon kicks up, and before long Tucker has come to Annie and Duncan’s town on some family business. As her moribund relationship crashes, a potential new one blooms.

The film, directed by Jesse Peretz from a screenplay by Jim Taylor, Tamara Jenkins and Evgenia Peretz, is less about the nature of faded celebrity than the quirky ways human connections happen, and expire. Annie and Duncan are seemingly content at the start of the story, but as events transpire the cracks in their relationship becoming yawning chasms.

Likewise, Tucker comes across at first blush as a lovable loser, a guy sponging off his ex-wife and content to never play in front of an audience again. But we see that his quirks are actually character flaws, such as being an erstwhile father to his far-flung children, though the proximity to Annie compels him to start working on these issues again.

Sweet and sad, “Juliet, Naked” is a tale of possibilities -- to do more and be more than we were yesterday.