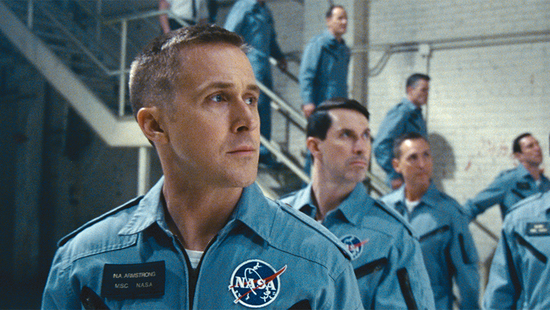 Neil Armstrong is the most famous person that nobody really knows.

He occupies a pivotal place in human history, an explorer who was the first person to step onto another celestial body other than the Earth. And yet while his name is known to virtually everyone, the man himself remains an utter enigma.

We quote his most famous words -- “That’s one small step for man, one giant leap for mankind” -- yet I doubt anyone on the street could tell you where life took Armstrong after leading the Apollo 11 mission to the moon and that fateful step.

(For the record, he resigned from NASA shortly afterward, taught at a regional college, raised his family, did a little endorsement work and lived on a farm. He even stopped signing autographs when he learned there was a lucrative black market for them.)

“First Man” is the new film from actor Ryan Gosling and director Damien Chazelle fresh off their shared success on “La La Land.” It’s a decided left turn from a flight-of-fancy musical, a deep-dive space drama that tries to get inside the head of a man who many people were unable to get close to. The screenplay by Josh Singer is based on a book by historian James R. Hansen.

It’s a surprising movie in a lot of ways. The most obvious is how it portrays the long struggle to get to the point where Armstrong could take that first step onto the moon, starting with his days as a civilian test pilot in 1961. To put it bluntly, he’s portrayed as a bit of a screw-up, a better engineer than stick-man, constantly in danger of being grounded.

He surprises everyone by being accepted into the Gemini astronaut program -- they pronounce it “GEM-i-knee,” not “gem-ah-NIGH,” by the way -- and showing a steady, calm approach to the work. It took seven years from the time President John Kennedy called for going to the moon until it actually happened, and along the way there was a mountain of setbacks, resistance, failure and deaths.

Chazelle goes through some of the usual space program preamble we’re used to from “The Right Stuff” or “Apollo 13” -- spinning test machines, cocky scientist types in short-sleeve dress shirts and buzzcuts, macho competitiveness between the astronauts leavened with mutual respect, etc. But it’s really a movie about Armstrong, who he was and how others related to him.

His wife, Janet (Claire Foy), is often as much in the dark about her husband’s interior state as everyone else. Like a stubborn turtle, Armstrong just plods along with his work, relentlessly focused on his goals, occasionally pulling into his shell when others prod too much. She loves him enough to grant him his space, but also knows when to intervene.

A pivotal event little known about is the death of their daughter, Karen, at a very young age after a long illness. It happened right before he applied for the space program, and in a startling admission during his job interview, he answers that it could have a psychological impact on him.

Chazelle shoots the space scenes as if he’s going for the opposite of big, showy, rah-rah moments. He’ll focus his camera on the condensation running off the rocket booster or the bolts surrounding the space capsule window. “First Man” demonstrates how the first generation of space flight was not accomplished in sleek “Star Trek” ships, but clanky contraptions that often looked like they’d been hammered together in somebody’s garage.

“First Man” may not be for everyone. It’s a slow-moving and contemplative picture, one more concerned with the space between Neil Armstrong’s ears than the dark matter that lay between him and the moon.

But for those who favor films that portray real people realistically, this one shoots for the stars.