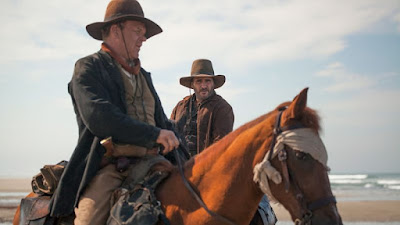 You might be tempted at first to think "The Sisters Brothers" is a Western comedy. It stars John C. Reilly and Joaquin Phoenix as a pair of gunslinger siblings operating out of the Pacific Northwest circa 1851. One's a drunk, the other's a wet rag, and the trailer makes it look like they get into all sorts of hijinks while frequently tussling verbally and occasionally physically.

But this is a serious-as-salt production from French director Jacques Audiard, who has made some excellent pictures including "Rust and Bone" and the little-seen but marvelous "Dheepan." He adapted the screenplay along with Thomas Bidegain from Patrick deWitt's novel of the same name.

It's part anti-Western, part existentialist rumination on manhood, along with a decent amount of shoot-em-up thrown in. The movie feels like a bunch of eclectic pieces that work well together, for awhile.

Charlie Sisters (Phoenix) is the hard-bitten one of the pair, a born killer who has no thoughts beyond earning his next bounty and spending it on drink and whores. Eli (Reilly) is the older, wiser one. He's not soft; he doesn't hesitate to put a bullet in a man's head when he's down. But he does these things because it is Charlie's way, and so it must be his as well.

He is his brother's keeper, which he regards as both duty and prison.

They work for a man called the Commodore (Rutger Hauer, only glimpsed) who sends them off on various assassination missions. They all involve revenge for stealing something from the Commodore. Eli ponders aloud why the Commodore is robbed so frequently. Charlie doesn't really care.

Their latest job involves Hermann Warm (Riz Ahmed), a chemist who has come up with a formula that he thinks will make it easier to pan gold from the water in California. Jake Gyllenhall plays John Morris, a detective assigned to locate Warm and track him until the Sisters Brothers can arrive.

Morris is a curious figure. He doesn't seem prone to violence, has the refined manners of a rich man's son and mostly watches his quarry from a distance while writing his thoughts into a journal he's keeping. Unlike the Sisters, we get the sense manhunting is simply a phase he's passing through on the way to other adventures.

I won't give the plot away, other than the first two-thirds of the story involves following these two men in their parallel journeys, one pair tracking the other on their way down the coast to San Francisco.

Phoenix has been giving one terrific, offbeat performance after another lately, but here he plays a more or less straight character, a prototypical Western anti-hero. He's very deliberate about not thinking too hard about anything. Eli, on the other hand, is a cauldron of swirling thoughts and regrets. He carries a red shawl from a lady friend like a totem, a reminder of their fading youth and foul choices.

It's probably one of Reilly's best performances. Unfortunately, the movie loses steam during its last half-hour or so. The story reaches a natural end point, and then it keeps wandering away on the prairie, like a cowpoke with nowhere to go and in no hurry to get there.

Posted by Christopher Lloyd at 3:18 PM