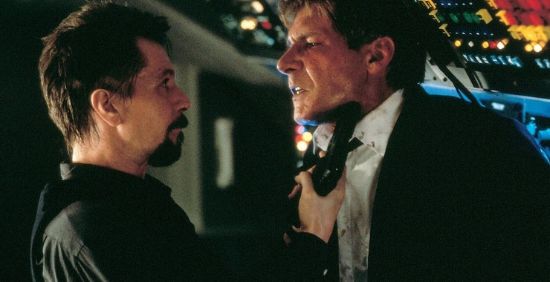 "Air Force One" was one of those movies that, even when it came out, people instantly recognized it for exactly what it what was: effective, jingoistic entertainment in which we get to root for our national leaders as legit butt-kicking heroes instead of the shrunken egotists and feeble pretenders they've largely become.

President Bill Clinton would screen the movie at the White House twice, no doubt happy to share the limelight with Mr. Indiana Jones himself, Harrison Ford, as his alpha-male stand-in, James Marshall. He's a Vietnam vet and Medal of Honor winner who goes toe-to-toe with a group of splinter Russian terrorists who have hijacked his eponymous plane.

The timing of the film's arrival is funny, since at the time we had turned out one legit war hero to elect a waffling draft-dodger, who would then win a strong reelection campaign against another, crippled war hero. It seems people like the idea of a president who lays it on the line, shooting guns and throwing haymakers, only in the abstract.

Written by Andrew W. Marlowe, his first feature film (and one of only three), "Air Force One" is notable for its tight, interlocking layers of storytelling and fantabulous cast. It's one of the leanest two-hour movies you'll ever see, and besides the perennially underrated Ford it also boasts Glenn Close, Gary Oldman, William H. Macy, Philip Baker Hall, Dean Stockwell and Xander Berkeley.

And, of course, it's directed by German master Wolfgang Petersen, who came to America and had a great two-decade run -- "Troy," "In the Line of Fire," "Outbreak" -- before being sunk by "Poseidon." Petersen is terrific at taking stories with lots of moving pieces and disparate characters and assembling it all so it clicks into a cohesive whole.

I was surprised watching it again for the first time in at least a decade how much geopolitical intrigue there is in the film. In the fictional world of the movie, the U.S. and Russia are chummy and have just deposed the dictator of Kazakhstan, Gen. Ivan Radek (Petersen pet Jürgen Prochnow), who oversaw a mass refugee exodus and threatened to use nuclear weapons.

Marshall has just declared a new interventionist stance on the world stage -- with the centerpiece being that they will take the fight to terrorists and oppressors instead of negotiating with or accommodating them.

So, of course, he's immediately faced with a situation where the president must choose between the welfare of his own family and staff or giving into a Russian terrorist, Ivan Korshunov (Oldman), who wants Radek sprung from prison.

Actual American interventionism would, of course, lead to some very dire outcomes not too many years down the line.

Korshunov gets a couple of chilling speeches that I'm sure went right over the heads of American audiences in the middle of the dot-com boom. Responding to the bitter denunciation of the First Lady, Grace Marshall (Wendy Crewson), that he has just murdered an innocent woman, Korshunov spits back:

"You, who murdered a 100,000 Iraqis to save a nickel on a gallon of gas, are going to lecture me about the rules of war?!?" This is a reference to the first Persian Gulf War, lauded around the world as a high point for American might married with collaborative diplomacy -- but not without its collateral damage.

Later, finally confronting the president in person, Korshunov rejects Marshall's insistence that he can't just call the Russian leader and have Radek released. Three years before Vladimir Putin came into power, Korshunov gives voice to a sentiment that was already gaining volume in the former Soviet Union.

"You talk as you have nothing to do with this. This is all your doing, this infection you call freedom -- without meaning and without purpose. You have given my country to gangsters and prostitutes. You have taken everything from us! There's nothing left!"

It's a little foggy about what Korshunov intends to do if his scheme works -- replace the weak Russian president with Radek? Of course, elaborate plots by heavily accented villains in the movies tend to have very limited steps. (See Gruber, Hans.)

The middle of the movie is essentially one real-time cat-and-mouse chase, with the Russians posing as journalists to get aboard Air Force One, then easily overpowering the Secret Service with the help of one of their own, Gibbs (Berekeley). For some reason, we never learn Gibbs' backstory or why he would undertake such treachery. He's actually treated as just one of the other hostages, until the very (literal) last minute.

Everyone thinks Marshall has safely gotten away in the escape pod, but secretly he hid in the bowels of the airplane and seeks to save his wife and daughter, along with everyone else.

"Air Force One" was in a lot of ways the apotheosis of the phenomenon of "Die Hard on a..." rip-offs, with "Speed" giving us "Die Hard on a Bus" and this being the "on a plane" variation. (Though, really, "Passenger 57" did that a few years earlier.) The basic concept is the same: the hero is trapped in a confined space with murderous forces and innocent bystanders, and has to puzzle out a solution.

Smartly, rather than just making the plane seem like an amorphous behemoth, the movie essentially divides it into a few key sections where the all the action takes place. The hostages are held on the main passenger level, with regular seats in the back and private space and a larger conference room for the POTUS and his staff up front.

Marshall is largely confined to the lowest deck filled with baggage, blinking gizmos that'll become important later, and the loading ramp -- which, along with the escape pod and a few other features highlighted in the film, didn't actually exist in the real presidential aircraft. He makes a few forays upstairs when he can, or draws the terrorists down to him by dumping the plane's fuel.

Korshunov mostly stays in the command center that's a half-flight up from the presidential quarters, along with the cockpit where his pilot (Elya Baskin) handles the flying, though as we'll see the fancy plane is practically autonomous, even ripping the steering column away from manual control when it's performing evasive maneuvers against incoming missiles.

Probably about a quarter of the action cuts away to the White House, where the Vice President, Kathryn Bennett (Close), tries to keep a tamp on the situation while dealing with a bunch of alpha male officials who would love to push her out of the way. Stockwell plays the defense secretary who has an "I'm in control here" moment in the Alexander Haig school; Hall is the Attorney General offering counsel; and Bill Smitrovich appears to be the top military brass at the table.

It was a pretty big deal in 1997 for a mainstream movie to depict a female vice president as an ordinary thing, in much the same we got our first black president in "Deep Impact" a decade before the real one. Bennett is shown as smart, tough and willing to make the hardest calls -- even with sexist taunts from Korshunov about sweating through her silk blouse.

Interestingly, for all our talk lately of "the 25th Amendment" option for deposing a U.S. president, it actually nearly happens in the movie. The A.G. obtains the signatures of a majority of the cabinet to declare Marshall unable to carry out his duties, and all it requires is for Bennett to sign off and become president. Her final moment of triumph in the movie is ripping up this declaration, thus proving both her mettle and loyalty.

Jerry Goldsmith shows up with one of his most most brass-heavy music scores, horns blasting out militaristic marches that land just this side of overwrought.

Is there more to "Air Force One" than it seems? I don't really think so. It's a very well done, manipulative (I mean that as a compliment) thriller with just enough political overtones to sound on the level without getting into any serious America-bashing.

Many other movies have done similar things, so here's what that can look like when it's done with an A-list cast, director and production values. This is the sort of Hollywood contraption that you go into knowing exactly what you're going to get, and come out mightily pleased that you got it.