Review: "Let Them All Talk" 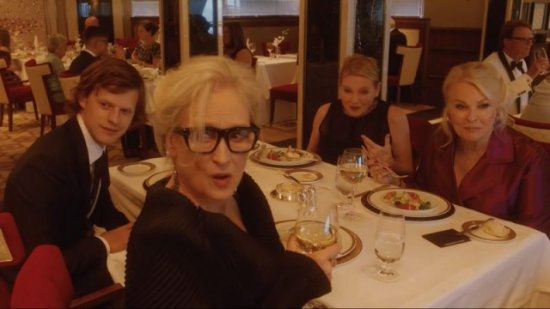 Reviewing movies is a little different these days. It's fair to say we're having to work extra hard. It used to be a relatively simple matter of seeing what new theatrical releases were coming up, scheduling/lobbying for screenings with the regional studios reps, and making a plan of what to cover.

With everything format-neutral now, it's difficult to know what's coming out in theaters, on Video on Demand and the varying streaming services in any kind of strategic way. I kind of have to take an educated guess about what's most important to review, and do that. The end result is that some outlets get more attention than others.

But this week was an easy call: I heard that a movie was coming out on HBO Max starring Meryl Streep, Dianne Wiest and Candice Bergen and said, "I'm there." Throw in Lucas Hedges and director Steven Soderbergh, and that's 29 Oscar nominations and six wins between them.

Talk about pedigree, and the film didn't disappoint.

Consider that over the past four decades, there has never been longer than a five-year period in which Streep was not up for an Academy Award. And she's earned every one of them. Streep continues to show ferocious strength and emotional subtleties in nearly all her roles, and "Let Them All Talk" is no exception.

She plays Alice Hughes, a renowned novelist nearing the end of her career. Alice is one of those smart people who works very hard to let everyone know how smart she is. She's observant, sensitive, and has a generosity of spirit, even if it only goes a certain way. Not a bad person, a little full of herself, though most people agree she has every right to be.

The story (screenplay by rookie screenwriter Deborah Eisenberg) entails a cross-ocean ship voyage Alice is taking with her two oldest friends, Roberta (Bergen) and Susan (Wiest), as well as her nephew, Tyler (Hedges). The purpose is to collect a major literary award in England, and Alice does not fly.

Her agent, Karen (Gemma Chan), also tags along, unbeknownst to Alice. Her latest manuscript is due, and no one in the publishing world even knows what it's about. Karen and her peers hope it is a sequel to Alice's most celebrated novel from 35 years ago about a woman, Rowena, who tanked her marriage horribly. It was a best-seller that was turned into a movie, and the agents and publishers can smell the surefire green of a follow-up.

Several dynamics are happening at once on board the ship. Alice has brought Tyler along to look after her two friends, since she stays in her cabin most of the day working, only emerging for a shared lunch and a solo swim. But Tyler gets recruited by Karen to be her spy to find out more about the new book, and becomes infatuated with her.

Meanwhile, Roberta and Susan are feeling left out and stiffed. Although they were the closest of friends in college, they don't really see each other much and their friendship has evolved to that stage of Christmas cards and occasional phone calls.

Susan, who works with abused families, is fine with this arrangement but Roberta is not. She seethes with resentment toward Alice, believing that the Rowena character was based on her.

Roberta is a real piece of work, toiling at a lowly (to her) job selling lingerie while openly campaigning for a rich man to marry. She's one of those people whose life hasn't worked out the way they hoped and now feel they are owed something -- and Roberta has decided Alice is the one who owes it.

For her part, Alice thinks she's doing her pals a great favor by getting them free passage on a glorious two-week ship cruise. It never occurs to her that spending time with her friends should be part of the bargain.

Left more or less to themselves, Susan and Roberta play loads of board games and natter away about the situation with Alice. They bump into Kelvin Krantz (Dan Algrant), a famous mystery writer -- think John Grisham and Dean Koontz rolled together -- who's also on the cruise. At first heaving-breast fangirls, they are delighted to strike up a chatty friendship.

There's a great juxtaposition of two scenes between Alice and Kelvin. She makes a great show of protesting she's never heard of him, even though it's likely he has sold many times the number of her books. While she's giving a talk, Kelvin gets up and gives a lovely paean to her favorite book (not the Rowena one). Later, she asks him about his own writing process and manages to insult him without seeming aware she's doing so.

(Though I suspect Alice is keenly cognizant of how she comes across.)

"Let Them All Talk" is a gem of a little movie with a half-dozen well-drawn characters, each of whom we feel like we get to know, and would like to do so even further. Even though Roberta and Alice can be rather unpleasant, the feel like full-bodied, authentic women who live in the real world.

I wasn't familiar with Algrant and Chan as actors, and both give very nice supporting performances that are small in screen time but feel big in their impact on the story. In most movies Karen would be depicted as a one-dimensional, conniving character but here we get to see all sorts of shadings we didn't expect. My only regret is she kind of gets pushed to the background in the last act.

And there's Streep, a cinematic giant who, at 71, somehow still seems to be building toward her peak rather than sliding down the back end of it. She's America's greatest living film actress (or actor), and I never get tired of talking about that.

Posted by Christopher Lloyd at 4:47 PM