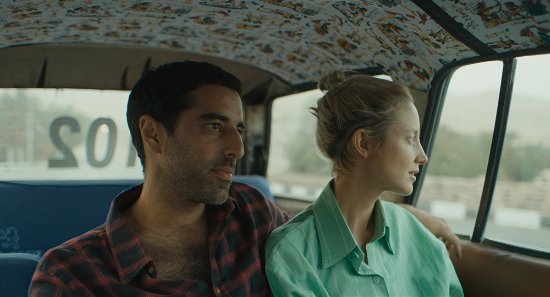 As I've gotten older, I've found myself much more appreciate of slower, languid filmmaking. Movies that would have bored me to death with the lack of a strong narrative thread at age 20 can more easily worm their way into my heart now.

I can't say, though, that "Luxor" was one of those.

Andrea Riseborough plays Hana, a woman at the crossroads of life, figuratively and literally. A surgeon who practices in some of the world's worst hot spots for conflict and economic strife, she has some time off before moving on to her next assignment. She's decided to spend it in and around Luxor, the Egyptian city where she made pleasant memories 20 years earlier.

Much of the movie, written and directed by Zeina Durra, consists of just following Hana around as she travels and looks at things. The wordless stretches are sometimes so long that when a character speaks again, we're momentarily jarred by the relative cacophony.

I guess we would call this movie a romance, since not long into her journeys Hana stumbles across Sultan (Karim Saleh), an archaeologist she knew back in the day. It is soon apparent that they were lovers, and their respective career and personal paths diverged. But now rejoined, they find the mutual longing is still there.

We get the sense that Hana, with her seemingly random day trips to historical spots, was probably searching for Sultan -- even if she didn't know it herself.

Not much really happens after that in the traditional sense of film storytelling. He shows her a "feminist temple" where a pair of lovers of an insignificant king raided his burial place, scattering his remains and replacing his images with their own. They go to his current dig to meet up with some of her other friends from back in the day.

Sultan follows Hana around like a presumptuous puppy, constantly with an arm on her or just encircling her body without touching, as if declaring ownership of her space. She is less receptive to a reunion than he is, but it feels like she's arguing with her own heart against the direction it's pulling.

With her omnipresent pulled-back blonde waves, thin face and shapeless clothes, Hana is playing the role of tourist in her own life rather than living it. She does cast sidelong glances at children playing nearby, and mentions to Sultan that she doesn't look at his Facebook page because it would be hurtful to see him happy on a beach with a wife and children.

I was never truly bored watching "Luxor," though I'll add I wasn't happy when its brief 85-minute runtime came to a close. I formed a pretty good idea of where the movie would end up, which it did exactly, and that's always a trifle disappointing.

"Luxor" is essentially the visualization of one woman wrestling with the first half of her life, which will end up deciding how the second one unfolds. That's ripe material for a really compelling story, but instead we just get the contemplation.