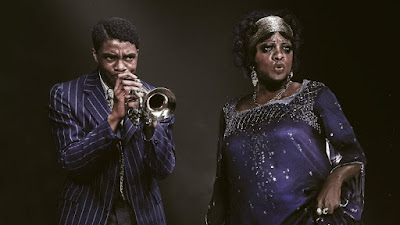 I've made a Top 10 list every year for about 25 years now, and if I were to line up 2020 in the cinematic pantheon I would call it about an average year for movies. Maybe a wee touch below -- not because we're missing nearly all of the big-budget films that pushed their release to the next year (or streaming platforms) because of "you know." But because the crop of award contenders that arrive in a rush of screeners at year's end severely disappointed me.

I powered through about a film a day during mid-November to mid-December, and the best stuff all arrived right at the beginning. It was a long slog after that.

So by necessity all of my favorite movies were "small" films, though I must say my tastes have been trending that way the last few years anyway. What can I say, getting older and all that. I still can adore the Star Wars and Marvel pictures and whatnot, just not enough to break into my top 10.

What I did not love were the two movies I was most anticipating since springtime, when it became clear only a handful of blockbusters would see their way to wide release. I really, really, really wanted to love "Tenet" and "Wonder Woman 1984." Instead they were among the year's biggest disappointments, not truly awful flicks but a crushing fall from the heights we were used to.

A big notable change you'll see in this list is the inclusion of films that debuted on video-on-demand or streaming services like Netflix, Amazon or Apple TV+. I'll never give up my belief that theaters is the best way to experience film, but this is the way of the new, platform-neutral world.

So here is my Top 10 Films of 2020, along with the usual odd jamble of contenders I considered for the list.

Other than the two mentioned above, I won't be doing a "worst of" or "most disappointing" list this year because, frankly, it's a depressing exercise. And bad movies tend to leave few footprints in my memory... going through my review list this year I'm amazed how many I'd complete forgotten.

Best of the Rest

Usually I anguish about the last few spots on my top 10 list, moving them up and down as I decide what will make the cut. Surprisingly, this year it was pretty easy to discriminate. Here are films I respected and enjoyed. In no particular order: