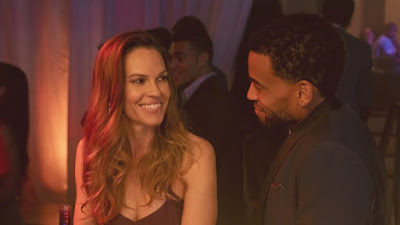 Hollywood has never had a firm idea exactly what to do with Hilary Swank. After winning two Oscars in her 20s for non-traditional gender roles, she's been constantly busy but rarely found strong parts in big films or a particular niche to fill. She was wonderful in the under-appreciated "The Homesman" a few years back, which almost nobody saw.

As a result, like Ben Kingsley she's an unfortunate contender for the title of "Oscar winner who appears in the most bad movies."

Sadly that's another point on the board for her with "Fatale," an aggressively awful psychological thriller where she plays a dirty cop setting up a sports management mogul played by Michael Ealy. It's one of those movies intended for mostly African-American audiences where she's relegated to the Evil White Person role.

I'm OK with making Caucasians the heavy, but just like it when it's done with something like originality and panache. This is like a grade-Z modern film noir where you can literally see every perambulation of the plot three moves ahead. It's crime story as soap opera.

Swank does get to play something we don't get to see her do a lot, a sexy role as an alluring woman of mystery. Her looks have unfortunately become something of a pop culture meme, including that famous "Is Hilary Swank hot?" episode of "The Office" some years back. To me, the answer is unambiguously "yes," so I don't exactly know why this is a thing or has acted to limit her roles.

Maybe it's because of her strong jaw or roles playing a boxer and transman. We've come so far...

The film is directed by Deon Taylor ("Lakeview Terrace") and scripted by David Loughery, both of whom have a knack for these sorts of slick, multicultural, vaguely exploitative dramas. (They worked together on "The Intruder," another crazy-honky-torments-beautiful-black-folk story, also starring Ealy.)

The end result is something that feels formulaic and unfocused. The filmmakers seem obsessed with bedazzling us with the bling of an affluent L.A. lifestyle -- fancy mansions in the hills, zero-edge pools, cars that cost as much as the average American house -- to the detriment of competent plotting and character development.

Ealy is Derrick Taylor, a rising sports agent who built his company from the ground up with his buddy and partner, Rafe (Mike Colter). They're already rich but about to break into the big time with A-list signees. (This being a low-budget film, Lance Stephenson, formerly of the Pacers and most recently the Liaoning Flying Leopards, is the biggest name they get for a cameo.)

His marriage with beautiful-but-icy Traci (Damaris Lewis) is on the rocks, and he starts to suspect all those late nights celebrating with real estate agents are something else. So when he's in Las Vegas for a friend's bachelor's party, Derrick falls to temptation with Veronica (Swank), a tall brunette who's simultaneously tough but needy in a locks-your-phone-in-her-hotel-room-safe kinda way.

Back in L.A., Derrick is nearly killed by a masked intruder in his home, and who would be assigned to the case but Veronica, who turns out to be a storied police detective. She's got some personal troubles of her own, including a snidely ex (Danny Pino) who's a city councilman keeping their daughter from her.

Somehow, Veronica funnels her hatred for her ex into her contempt for Derrick, because he "used" her back in Las Vegas. Veronica's motivation for her subsequent dastardly actions is the movie's most under-explored territory, which leaves Swank having to stand around spewing a lot ridiculous gun-moll dialogue without any context to ground her character in. I hate to say it, but some of her line readings even come off as amateurish.

As for Ealy, Derrick is built as such a passive, reactive character that he seems like a puppet in his own life. We get lots of scenes of him with brow furrowed and jaw tucked into his chin as he struggles with his fate. I think he's supposed to smolder but largely comes across as an indecisive wimp.

Movies like "Fatale" are made to serve a very specific purpose, and I'm guessing the audience it's intended for will be sated by spoon-feeding them what they want. Personally I hate to see Swank used so poorly once again -- but then again, she signed on for this dreck.

Posted by Christopher Lloyd at 2:22 PM