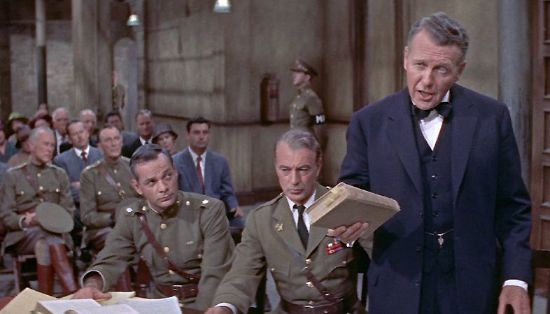 "The Court-Martial of Billy Mitchell" is exactly the sort of stolid, mid-century fare Golden Age Hollywood churned out with extraordinary regularity and speed. I wouldn't call it a B-picture because it stars Gary Cooper and was directed by Otto Preminger, both still at their creative peaks.

But it's not a particularly well-remembered movie. Much the same could be said of its titular character, Billy Mitchell, who is regarded as the father of the modern Air Force.

He was a World War I hero pilot who ended up in command of all American aerial forces, back when they were part of the Army. He received a field commission to brigadier general but was busted back to colonel for insubordination owing to his strenuous advocacy of air power, and eventually was court-martialed, a punishment he deliberately brought upon himself because it would lend a public forum for his criticisms.

He threw away his military career to make a point, and almost everything he advocated for eventually came to pass. Mitchell received many posthumous honors after his death in 1936, including a commission to major general by FDR, with whom he'd clashed repeatedly when the future POTUS was Assistant Secretary of the Navy.

Preminger was a master of the courtroom drama ("Anatomy of a Murder," "Advise & Consent"), which takes up the second half or so of this film. That's where it really starts to snap, even though Cooper spends most of his time sitting ramrod in a chair, saving his energy for his big testimony scene at the end.

The film takes a few liberties with the historical record, with a screenplay by Milton Sperling and Emmet Lavery, with uncredited contributions by the blacklisted Dalton Trumbo, Michael Wilson and Ben Hecht.

For example, it's depicted that it was Mitchell disobeying orders during an air power demonstration that caused him to be demoted, when it was other antagonisms brought on by his testifying before Congress.

In the movie Mitchell is allowed to prove his air force's capability by trying to sink the mammoth German battleship Ostfriesland, but his antagonistic superior, Maj. Gen. Jimmy Guthrie (Charles Bickford), handcuffs him by ordering the planes to attack at high altitude with small bombs. After one ineffectual run, he disobeys orders, swoops in with the big boomers and easily sinks the ship.

None of this actually happened; in fact Mitchell was demoted four years later.

The film also shows Mitchell refusing to challenge the impartiality of any of the 13 judges at the court-martial, saying he wouldn't want to impugn the integrity of a general officer. In actuality his attorneys successfully struck three of them, including the president of the court (depicted, ahistorically, as Guthrie in the movie).

It's a terrific who's-who cast of mid-century actors, including folks who made a bigger name for themselves later on. Jack Lord plays Zachary Landsdowne, a young Naval aviator and friend of Billy's who dies flying a dirigible he knows to be unsafe. The turning point in the trial comes when his widow, Margaret (Elizabeth Montgomery), testifies about his sacrifice and shames the presiding officers into allowing other "justification" witnesses like herself.

Darren McGavin, eternally the dad from "A Christmas Story," turns up as Billy's right-hand man in the aviation unit, Russ. At one point he and the rest of the pilots ask Billy's permission to quit, since so many of them are dying from outdated planes and shoddy equipment, not to mention the spectacular indifference to air power from high command. Peter Graves also appears in a small role.

The meatiest parts go to the attorneys. Ralph Bellamy plays Frank Reid, another friend and a Congressman from Illinois who served as Mitchell's chief defense counsel during the trial. (That may sound strange, but people forget that national politics wasn't always a 24/7/365 gig. When he was president, Harry Truman used to go off on long weekend drives with just a Secret Service agent or two.)

Reid is a classic Hollywood politician: an elbow-twister and a glad-hander, a man who will talk your ear off and then make a job about how he talks too much. During one point in the court-martial, he stages a winding filibuster while the proper witnesses and evidence are gathered.

The prosecutor is Col. Moreland (Fred Clark), a cocksure sort who thinks he's got the case in the bag and finds himself overwhelmed and increasingly mocked. As shown in the movie, the court-martial really did take place in a dilapidated warehouse converted just for the occasion -- a not-subtle attempt to keep the lid on things.

For the final part of the proceeding, a young major, Allen Gullion, is brought in specifically to cross-examine Mitchell. He's played by Rod Steiger, and despite not showing up until the last act he makes a profound impression.

Steiger's Gullion has a slithery sort of charisma, sliding in and out of his chair with hips cocked like he's about to commence sashaying instead of stipulating, plump neck insufficiently contained by a tight military collar. He needles Mitchell and tries skillfully to trip him up. Billy, fighting off a bout of malaria, wipes his brow frequently but maintains his composure.

I think Steiger was really good in these smaller "batting cleanup" parts, whereas he could sometimes be overpowering as a lead.

This is the sort of role Cooper was born to play. He's the epitome of the movie star who always plays himself, or at least their screen persona. For Coop this meant men who were brave, true, humble, faithful, with cagey instincts if not the finest book-learnin', a believer in discipline who wasn't afraid to buck authority when doing the right thing dictated so.

Certainly this latter portion describes the real Billy Mitchell, who spent his last years in exile but whose true legacy was only realized after he was gone. A lot of people aren't aware (I wasn't) that the iconic B-25 bomber is named the Mitchell after him, the first military airplane to be done so.

"The Court-Martial of Billy Mitchell," and the man it lionizes, are due for better remembrance.