Review: "The True Adventures of Wolfboy" 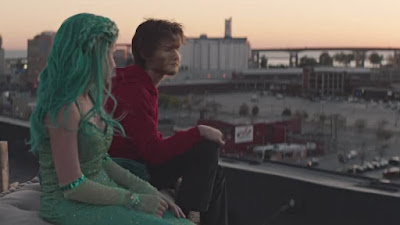 "The True Adventures of Wolfboy" is a sweet, whimsical modern fairy tale, though also a little bit sad. But the sadness feels right.
If it seems premised on a gimmick -- a boy born with hirsutism, aka copious facial and body hair that makes him resemble the titular nickname, goes on a road trip to discover himself -- that's because it is, though the filmmakers are quick to acknowledge it. Screenwriter Olivia Dufault and director Martin Krejcí position the tone somewhere between literary fantasy and sobering verisimilitude.
We may find the characters a little constructed or even weird, but their emotions and exploits land with surprising weight.
Jaeden Martell ("Knives Out") is Paul, a 13-year-old kid from Ohio. It's just him and his dad (Chris Messina), a decent if not particularly sensitive sanitation worker who loves his son and wants him to fit in and be happy. He doesn't seem to realize that can't happen when people stare at you wherever you go, and many boys are keyed up to bullying mode at first encounter.
Paul wears a ski mask most everywhere he goes, which isn't very far. His dad is pitching him on a private school for kids with varying sorts of physical disabilities, and even buys him the coat-tie-and-shorts uniform to try out. But Paul has received a surprise birthday gift from the mother he has never met, inviting him to come visit her in Pennsylvania and find out the truth of why she left.
So off Paul goes, to have the aforementioned adventures. The filmmakers cleverly divide these up into chapters based on the new people he will meet, presented as illustrated pages of a storybook. So for example when he meets a vaguely punk girl with pink hair and an eye patch with a penchant for robbing stores, she becomes the Pirate Queen.
I just love, love, love this cast. Martell is sensitive and soulful as Paul, but also not afraid to show us a young man with some bite in him. He's been kicked around and devalued by everyone in his life, most especially himself, and as he enters the cusp of manhood a part of him is eager to stiffen his spine and fight back. This could lead him to self-confidence but also potentially to becoming that which he beheld.
Eve Hewson is charismatic and cagey as Rose, the aforementioned pirate girl, who seems like she's holding onto all sorts of secrets that don't come through in her dialogue. She lives in her van and actually looks forward to the possibility of prison as a welcome break in her routine.
John Turturro plays Mr. Silk, the extravagantly ostentatious owner of a third-rate carnival near Paul's home. He wanders in there and is offered a job as a circus freak, though Silk is careful to couch it in more positive -- though certainly manipulative -- terms. We'll see more of him later.
The always-wonderful Stephen Henderson shows up as an older man who has some special insight for Paul. There's just something about Henderson's voice and poise that instantly makes you feel safe and welcome. Chloë Sevigny plays his mom, whose meeting with Paul is everything and nothing we'll expect.
And then there's Sophie Giannamore as Aristiana, the "mermaid" Paul meets in the course of his journeys. She's about the same age as him, but at night when her mom is working she wanders over to drag bars where she performs onstage, favoring colorful costumes. Aristiana is hopeful but realistic, making her way through a world that devalues her and may even shorten her life, but with a sense of willful self-awareness most people don't possess at 64, let alone 14.
It's rare that you see a child actor and immediately think, "I can't wait to see what they do next." Natalie Portman, Haley Joel Osment, Jodie Foster and Jacob Tremblay were on that very short list. Now, so is Giannamore.
"The True Adventures of Wolfboy" is a marvel, a movie that feels quite old but also very much part of the here and now. All of us have our flaws and freakishness, some closer to the surface than others. Sometimes you have to go a long way to find out where home is.

Posted by Christopher Lloyd at 4:15 PM