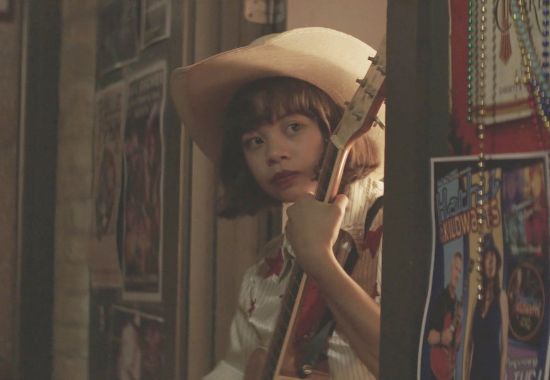 "Yellow Rose" is like an old, familiar tune you've heard many times before, but played in a pleasing new arrangement performed with heart and grace.

We've seen lots of variations of this story, as with the recent iteration of "A Star Is Born." A nobody from nowhere with tremendous talent but not a lot of connections or self-confidence grows into their role as an artist, walking through a door that will define the path of their lifetime. Here, it's not to superstardom and Grammy Awards -- at least, not yet -- but to a simpler plateau of acceptance and acknowledgement.

The star-to-be is Eva Noblezada as Rose Garcia, a Filipino/Latina teenager living in the backwaters near Austin, Texas. She grew up loving country music, but only plays for herself in her bedroom on a beat-up old guitar. She's like beautiful kite laying on the ground, that just needs the right gust of wind to pick up and soar.

The central conflict is that Rose and her mother (Princess Punzala) are illegal immigrants who moved to Texas from the Philippines seven years ago. They're scraping by with mom working as a maid and front desk attendant at a lowdown motel, and Rose getting ready to start her senior year in high school. But then her mother is snatched up by immigration authorities, taken to a detention far away and threatened with deportation.

Meanwhile, Rose goes on the run with the help of Elliot (Liam Booth), a classmate who would clearly like to be more, but works hard at seeming nonchalant about it. She stays with her wealthy aunt Gail in Austin (Lea Solanga) for a bit, but there's been little connection between the family members and her husband soon insists Rose move out.

(Interestingly, Salonga is the biggest established singing star in the cast, winning a Tony Award for "Miss Saigon," but barely warbles a note in the movie.)

Rose winds up at the Broken Spoke honky-tonk in Austin, an old-school boot-scootin' place run by Jolene (Libby Villari), a tough old broad who lends a hand to the downtrodden. Rose works waiting tables and selling merchandise, sleeping in an upstairs room.

When the ICE agents come raiding again, Rose moves on to the backyard trailer of Dale Watson (playing himself, or at least a movie version of it), a deep-voiced crooner with a tremendous silver pompadour and a world-weary vibe. They start to collaborate on some songs, as Rose now has the lived experience necessary to write about pain, separation and always feeling like an outsider.

Noblezada, who has lots of stage experience in musicals, has a lovely pure voice like a fresh flower bloom with the dew of morning still clinging. The movie actually takes quite a while before she really belts one out, but the wait is worth it.

The songs were written by Christopher M. Knight, and at least a couple are real keepers. My favorite was "Square Peg," which sounds like something straight out of the Patsy Cline playlist.

Writer/director Diane Paragas gets tremendous empathy out of her actors, not just Noblezada but the entire cast, from the leads to the smallest roles like Gustavo Gomez as another immigrant runaway Rose befriends. The story is inspired in part by the real-life upbringing of Annie Howell, who has a story credit.

This is a simple, lovely tale without a lot of embellishment or look-at-me showboating. It reminded me for some reason of "Straight Story" and "The World's Fastest Indiana," sentimental films about old men on their last big jaunt in life. Here it's a young girl taking her first steps toward a life making music, and we're so happy to dance along the way for a bit.

Posted by Christopher Lloyd at 6:07 PM