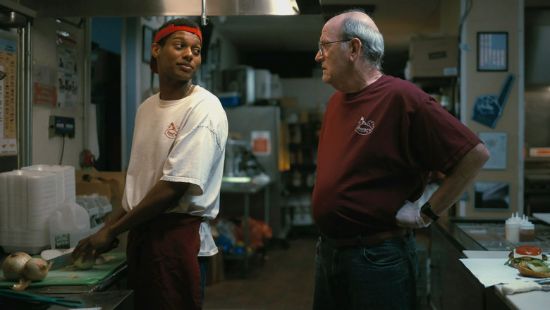 Stanley is the sort of guy you look past.

He's a working stiff from a dumpy Michigan town, never really been anywhere, never amounted to much and never will. He's unfailingly polite, even deferential, gimps around on two balky knees and just makes do. Approaching an age where many people give up their driver's license, Stanley is just about to obtain one for the first time.

As played by Richard Jenkins in "The Last Shift," Stanley is the sort of resonating character you don't see much in the movies anymore: an older, blue-collar guy without much education or sophistication. Spend some time with him and you might even conclude he's a little slow.

The easy choice would be to grant him a heart of gold, but writer/director Andrew Cohn instead chooses to plumb the depths of what some might consider shallow waters and finds a simple, authentic soul worthy of our observation and empathy.

As the story opens and the title implies, the events of the story surround Stanley's last days on the job at Oscar's Chicken & Fish, a rundown fast-food joint favored by drunks and teenagers because it never closes. He has worked the third shift, 10 p.m. to dawn, for 38 years and is ready pack it in. His plan is to drive down to Sarasota, move his mom out of the low-end nursing home where she lives, and take care of here, well, until.

But first he has to train his replacement, and he's not too happy with the choice: Jevon (Shane Paul McGhie), a young black kid who has just been released from prison on probation. Javon is sharp but unseasoned, a guy who's not bad at heart but can't keep anything up for long, including a job. He's got an ex-girlfriend with whom he has a toddler son, all of them crashing at his mom's place in domestic non-bliss.

Working the night shift at a dead-end greasy spoon is not Jevon's idea of a fantastic turn of events, and he's not shy about making that known. He and Stanley have multiple clash points: generational, racial and their approach to work. Stanley's the kind of guy who'll happily recount the cash drawer if it's 30 cents off. Jevon avows his intention to do the bare minimum to get by.

Cohn is an increasingly familiar creator: a filmmaker who stated out in documentaries and is now making the jump to narrative movies. He previously made the excellent docs "Medora" and "Night School," both set in Indiana cities. (He has twice been awarded the Hoosier Award by the Indiana Film Journalists Association, of which I'm a founding member.)

Cohn is not here to comfort or provoke but to simply show us two very different men and how they tick, presenting them without adornment or obfuscation. This is a film of few big "moments" and many wondrous small observations.

Like, Stanley's crabbed little locker filled with what appear to be family photos. Is this his wife and son? What happened to them? Where are they now? Did abandon them, or lose them? Stanley and the story are silent, allowing us to fill in our own ideas.

Or the way, after a few nights on the job, Jevon and Stanley have a throw down argument about race, with Stanley the sort of guy who is incapable of wrapping his brain around the notion of "systemic racism," which ends with them both walking off in a huff. But Jevon is careful to push in the chair he was sitting in.

A few other characters flit in and out of the story, mostly during the daytime when these two are apart. Like Ed O'Neill as Dale, Stanley's lifelong buddy, and Sidney (Birgundi Baker), Devon's long-suffering ex. There's also Kelly (Allison Tolman), Devon's probation officer and Shazz (Da'Vine Joy Randolph), the no-nonsense head manager at Oscar's. Stanley flatters himself he and Shazz have a "co-thing going on," but we know the score.

Things go on. Stanley makes $13.50 an hour, and his life savings amounts to maybe a couple thousand bucks of stashed cash. His plans to get his license, buy a cheap car and drive a thousand miles to Florida will not go smoothly, as we instinctively know.

Jevon was a gifted writer in high school, including a column in the school paper, but has slid sideways since. As one person puts it, he's just an "outdoor cat" who isn't going to stick with the standard 9-to-5 -- or even 10-to-6 -- lifestyle. We root for him and feel like he's going to get there, but it may just take longer than usual.

And Stanley shall always be Stanley. He's a man who thinks he knows his place in the world, and professes to be content with it, but somehow hasn't really met himself yet. The lost souls often aren't wandering, but toiling in one place right in front of us, unseen.

Posted by Christopher Lloyd at 6:51 PM