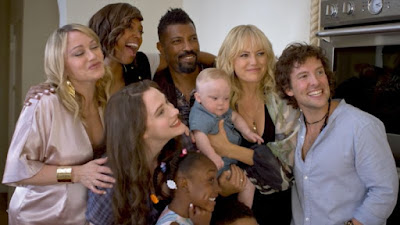 There aren't a lot of great Thanksgiving movies. "Planes, Trains and Automobiles" is about it, and the holiday is actually pretty tertiary to the plot. "Home for the Holidays?" "Free Bird?" "The House of Yes?" Not exactly a lot of quality choices at this table.

So given that low bar, "Friendsgiving" immediately gets counted as one of the better ones.

A comedy with some dramatic moments, as opposed to a true dramedy, it has a very TV sitcom-y feel. Malin Akerman and Kat Dennings play besties, both heartsick from recent breakups, who have vowed to spend Thanksgiving together, just the two of them, for some commiserating and libations. But then some unexpected guests show up, and then some more, and soon the house is festooned with a small army of interlopers.

It's a chaotic scene of ex-boyfriends versus rebound boyfriends, married-with-kids types bouncing off of childless singles, a wildly inappropriate mother, an irritating showbiz couple, a vegan shaman wannabe, and a random assortment of lesbians vying for attention in the form of video personals ads that they just sort of turn away and start spouting like a Shakespearean soliloquy. (They're pretty stereotypical, but also pretty funny.)

It's helmed by Nicole Paone, a veteran actress and writer who's making her directorial debut. She gets a great sense of spontaneity and charm out of her cast. The material feels a little canned, but hits all the right high and low notes.

Dennings is Abby, a loser sort who didn't even come out of the closet as gay until she was nearly 30. Her last relationship was borderline abusive, and she's got lots of self-esteem issues. She recently found out her ex is getting married, and the nails-on-chalkboard "support" from her mother and sister (via video call from Jersey) just ratchets up the tension.

Apparently Abby and her best friend, Molly (Akerman), came out to Hollywood to try to make it and only one of them did. Molly's a big movie star best known for action movies, and would seem to be living the dream with a Beverly Hills mansion and a 6-month-old son. Unfortunately, she is in the process of getting divorced and has already taken up with Jeff (Jack Donnelly), a beta-male Brit who often goes around without a top, or a bottom.

Jeff is... a piece of work. He seems incredibly warm and nice and supportive and deluded. He and Molly have only been together two weeks but he's already talking life journeys together. But he's not big on responsibility, or making money, or other grown-up things. He travels the globe running charities of indeterminate nature, which is how he makes do in between sugar mommas like Molly.

First to crash the party is Molly's Swedish mother, Helen (Jane Seymour), who shows up for a "surprise" visit of dubious intent. Helen is one of those women who claims to be unconcerned about her age but will throw herself at anybody, or everybody, as long as it means holding the spotlight.

This includes Molly's ex boyfriend (before the husband, so a double-ex), Gunnar (Ryan Hansen), another big movie star, who shows up semi-invited looking to pitch woo.

Aisha Tyler and Deon Cole play Lauren and Dan, described as "the perfect couple," who have a great relationship, two wonderful kids and never any real problems. Andrew Santino and Christine Taylor are Rick and Brianne, just-married Hollywood types who seem to be in a war to out-douche each other. Then there's Barb (Dana DeLorenzo), who professes to be a holy woman carrying a song of peace but is just another loud-mouthed New York type underneath.

You can feel where everything in the movie is going to go before it goes there. Abby and Molly will have some sort of falling out, quickly repaired by the final scene; Helen will embarrass herself and her daughter repeatedly; Gunnar and Jeff will play a game of passive-aggressive one-upmanship; and there will be some sort of crisis that puts everything on hold (for a bit).

My biggest surprise was that instead of pulling out pot or pills for the inevitable "let's get high" scene, they turn to mushrooms instead.

I mostly enjoyed myself watching this movie, even though it held few surprises for me. Akerman and Dennings have a nice chemistry together as lifelong pals, and the various supporting characters perform their individual little dances well.

As usual, movies that reflect Hollywood do so in a jaw-droppingly naïve way, such as the fact that Molly is supposed to be a movie star and yet doesn't have a single employee or entourage member to help out. So there's a lot of bustle about who's watching the baby or who's making sure all the food gets heated up in the right order, and we all know there'd be like two nannies and four cooks at a bare minimum, all forced to work on Thanksgiving and probably with instructions not to look anybody famous in the eye, too.

Molly even takes a Lyft to get from place to place, and if your suspension of belief hadn't dropped by then, at that point it falls down a well.

Still, this is a well-meaning and warmhearted movie that doesn't aim very high, but doesn't disappoint.

Posted by Christopher Lloyd at 2:54 PM