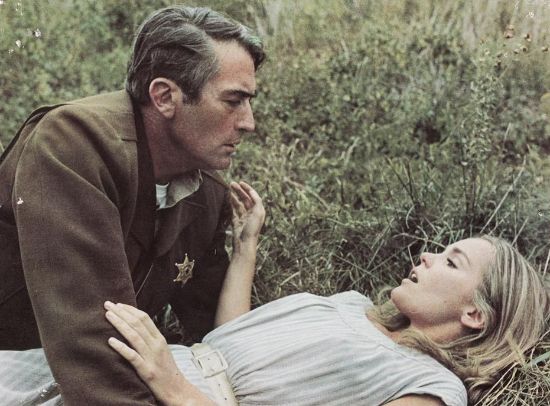 "I Walk the Line" came out 14 years after Johnny Cash released the ubiquitous song with which it shares its name, and 25 years before the Cash biopic starring Joaquin Phoenix that also bore that title. Thematically it bears little relation to the song, which is all about devotion to a loved one and rejecting temptation, while the movie is about a man who does exactly the opposite.

Cash actually re-recorded "I Walk the Line" for the 1970 movie and, apparently inspired, wrote a bunch more songs and wound up supplying the entire soundtrack. One track, "Flesh and Blood," ended up hitting the top of the country charts, so the soundtrack is better remembered than the movie.

It's not a particularly good film but it is an interesting one, and sometimes that's a better thing -- particularly when being discovered decades down the line.

John Frankenheimer surely belongs in the sad pantheon of "best filmmakers never to receive an Oscar nomination." He's often confused (even by me) with his similarly monikered contemporary, William Friedkin, who released "The French Connection" the following year. Frankenheimer would direct its 1974 sequel, and continue on to be a busy director through the early 2000s.

The film stars Gregory Peck, a star with whom the word "decency" seems almost synonymous. So playing Tawes, the Sheriff of an unnamed rural county, is very much against type. Tawes seems resolute and upstanding, but it turns out he's a very weak man indeed, capable of capriciousness and even cruelty.

No first name is ever given for Tawes -- even his wife, Ellen (Estelle Parsons), and teen daughter refer to him as "Sheriff." He's had this post a long time and, it seems will keep the job as long as he wants. There's not much to it, mostly driving around resolving conflicts between neighbors over cut-down trees and the like.

But when he lays eyes on Alma McCain (Tuesday Weld), all bets are off. Tawes is completely swept away by her, even after learning Alma is the daughter of notorious moonshiner Carl McCain (Ralph Meeker). He enters into a strange, strained dance with the McCain clan, where he essentially rents Alma for sex in return for looking the other way from their illicit activities.

But then the stakes are raised, both criminally and emotionally as Tawes actually falls in love, or least convinces himself he is. It's quite apparent to the audience and to Alma that their relationship is just an arrangement, but the Sheriff is the only one who can't see it.

Frankenheimer wanted Gene Hackman to play Tawes, and as much as I admire Peck I can't help wondering what that version of the movie would be like. This film really required a tortured portrayal of inner turmoil, but Peck is more of the "stare hard and don't show weakness" generation of film actors.

My initial reaction was also that Hackman was too young to play an aging lawman, but the two men are actually only 14 years apart in age.

The script by Alvin Sargent, based on a novel by Madison Jones, is more notable for what it doesn't say or show than what it does.

There are references to events in Tawes' past that might leave him vulnerable to such a temptation, but they're not fleshed out. Apparently he lost his mother and sisters in a car accident some years back, which rendered his father (J.C. Evans, Frankenheimer's wife's grandfather) a doddering mess who keeps expecting his family to walk in the door.

Parsons is terrific as Ellen Tawes, who manages to be both headstrong and utterly submissive at the same time. She refers to throwing herself at the Sheriff and more or less forcing him to marry her, but now he barely speaks to her. The scenes inside their house are hard to watch, with Tawes hardly looking his wife or daughter in the eye or saying a word, as if blaming them for his lack of devotion to them.

Even after suspecting that her husband is playing around on her, Ellen makes it clear she's willing to accept his occasional philandering as long as he returns home. (Speaking of, it's an awfully big, nice house for a poor public servant.) Tawes feels like a man trapped, but this is the sort of gilded cage many a man would willingly place themselves inside.

It's also hard to grasp what it is he sees in Alma. Weld plays her as a coy, calculating but not hateful person who is more than happy to trade her body for her family's security. The McCains have been moonshiners for generations, picking up everything they have every once in a while when the feds come around sniffing. She seems as surprised as anyone when Tawes starts talking about running away together to Chicago, California or whatnot.

"You've got your people, and I've got mine," is how she puts it, which is the extent of her understanding.

Tawes and Carl McCain don't even meet until halfway through the movie, when a chortling federal agent, Bascomb (Lonny Chapman), starts investigating the interstate flow of illicit alcohol. Tawes tries to play the high-and-mighty lawman, but McCain knows he's already got the Sheriff under his thumb. He's not at all bothered by offering his daughter up for sex, seeing her as just another family asset to be leveraged.

"We'll take our chances. After all you won't be gettin' the worst of it, ya hear? You keep on gettin' the best of it," he says.

Alma has two younger brothers, Jeff Dalton as 18-year-old hothead Clay and Freddie McCloud as towheaded rapscallion Buddy, who's maybe 10. Her job is to cook and care for the men as her mother is long gone. There's a brief tender moment between her and her father that has incestuous connotations; even if he doesn't sexually covet Alma the elder McCain certainly considers her his property.

The other player is Charles Durning as Hunnicut, Tawes' only deputy. He's the sort of man, quick to a laugh or a drink, who everyone dismisses as fat and stupid. But Hunnicut is cracker cagey, constantly watching his boss out of the side of his eye.

He's the first to sniff out Tawes' affair, though it's never made clear what he intends to do with this information. Blackmail him? Take his job? Durning takes a rather underwritten role as a standard-issue redneck cop and gives him all sorts of nefarious shadings that make us fear him, even more so than the McCain patriarch.

"I Walk the Line" is a simple piece of clockworks with only a few moving pieces. There's the McCains, happy to keep to themselves and ply their trade, and willing to make whatever reasonable (to them) accommodations are necessary to keep doing so. Sheriff Tawes, the most upright man in the county but desperate for affection -- even though he's got plenty of it at home, and can't tell when presented with an ersatz replacement.

There's a good movie in here somewhere, or could be. What we're left with is a lot of interesting pieces that don't really fit together.