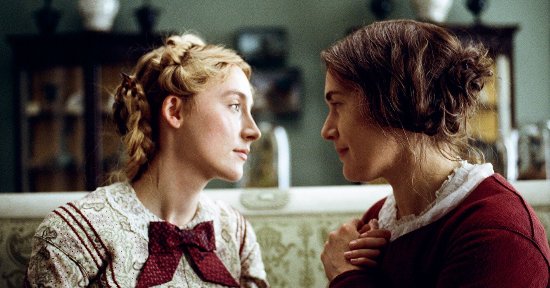 Two very different women meet on a lonely windswept island during corsets-and-repression times. They are brought together by circumstances involving artistry and marital obligations. After an initial period of hostility, they soon fall for each other and begin a torrid romance. But then, the reality of their forbidden love in a world ruled by men reasserts itself, leading to bitterness and regret...

Another paean to "Portrait of a Lady on Fire," one of my favorite films from last year? Could be; I love singing that movie's praises.

But it's actually a description of "Ammonite," a new film starring Kate Winslet and Saoirse Ronan that thematically sounds almost like a carbon copy of the earlier French film. I can only imagine writer/director Francis Lee and his cast learning about "Lady" while gearing up for their own production -- must've been a real facepalm moment.

This movie is perfectly fine, and no more. Winslet is terrific as always, playing a woman who lives so much inside herself that it's a veritable miracle that she can let anyone else in, even briefly. And Ronan continues to display a range and depth heralding her as one of the finest actresses of her generation.

But the film has a dread lack of surprise to it. You can practically count the beats until the next change in a choreographed dance. It's never good when you already know where a movie is going to go.

Winslet plays Mary Adding, very loosely based on a real paleontologist of the same name in early 19th century Britain. In another age Adding would've been recognized as a great mind, chaired a university department and been showered with awards and honors. Instead, she operates independently as a self-taught scientist on the island of Lyme Regis, collecting marine fossils from the beach that she sells to tourists in order to earn a hardscrabble existence.

Mary has never wed or had children, nor regretted it, plunging herself into her painstaking work -- collecting fossils, then cleaning and cataloguing them. She also writes and draws well, and her shop is more of an artist's studio than a scientist's laboratory. Mary lives with her aged mother (Gemma Jones), who bore 10 children and watched eight of them die, taking a piece of her soul each time.

Now mostly they just skulk about their claptrap house, trying not to get in each other's way.

One day Mary is visited by Mr. Murchison (James McArdle), a wealthy young paleontology buff attracted by Mary's faded reputation. Years earlier she discovered a complete ichthyosaurus skeleton, now on display in the London natural history museum. She immediately spots Murchison as a cheeky dilettante, the sort who'll be on to painting or chemistry by next year. But she accepts his coins to let him follow after her for a bit.

Murchison has brought with him his wife, Charlotte (Ronan), who is suffering from a long state of melancholy after a familial tragedy. Back then, doctors did not distinguish between ailments of the body and mind, so she has been instructed to take the sea air and make herself better.

Murchison would rather go on a fossil-hunting exhibition than be tethered to a moody spouse. He's the kind of fellow who thinks he can impose on others because he has money, so he bribes Mary to be Charlotte's companion while he's gone a few weeks.

Pinched and dour, Mary is a hard person to know. Winslet makes do with the smallest of gestures and expressions to communicate changes in disposition. At first put out by Charlotte's presence, she grows more sympathetic when the young woman falls ill, moving into her house and, quite literally, her bed.

We meet Elizabeth (Fiona Shaw), the town apothecary and a free spirit. Without anything being said, we quickly surmise that she and Mary previously had a relationship that ended badly. So she's sorely put out when she sees Elizabeth taking a shine to Charlotte. Perhaps this impels her to become more urgent with this new prospect.

There's a tidy little scene where they go to the beach after Charlotte has recovered, both wearing the poofy dresses and clunky boots of the time. A ray of sun finally poking through the dim south England clouds, Charlotte discards her shoes and socks, perching her pale bare feet on a rock -- as much for Mary's eyes as the warmth. Just that tiny sliver of forbidden flesh pushes her over the edge.

Their pairing is a meeting between hot and cold, old and young, the beat-down and the hopeful. (The sex scenes are also surprisingly explicit for A-list actors.) We know where this is going to end, but do feel some of their joy and pain along the way, and that we do is to both actresses' credit.

Perhaps I would've admired "Ammonite" more if it had come out before "Portrait of a Lady on Fire," and the latter, less. Somehow, though, I doubt it.

Posted by Christopher Lloyd at 2:07 PM