Review: "Most Guys Are Losers" 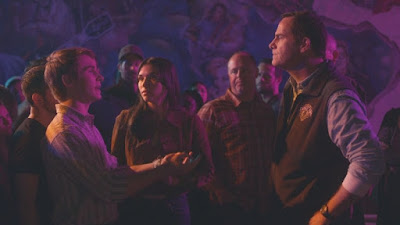 Based on the title I was expecting "Most Guys Are Losers" to be some sort of pseudo-feminist man-hating screed about how men are such scum and who'd want to date one, at least until somebody with a six-pack and six-figure income comes along.

I think I would've enjoyed that; everyone's kind of P.O.'d and chippy these days anyway, so it would've fit our collective mood.

But the film, written and directed by rookie Eric Ustian, omits the latter part of the title of the actual book that inspired it: "(And How to Find a Winner): Dating Wit & Wisdom from Your Dad." Yes, this is a movie based on a self-help book.

So here's the progeny of this flick: a guy named Mark Berzins, who owns a bunch of bars in the Denver area, wrote the book partly as warning to men who wanted to date his daughter, but also as advice for her on how to pick a suitable (to him) mate. It contains a lot of old-timey rules about how to be a man's man -- respect your mother, earn your own way, etc.

So Ustian turned it into a romantic comedy, with Andy Buckley (best known from "The Office") playing Mark. The location is switched to Chicago (better film tax credits, prolly) and we meet Mark's daughter, Sandy (Grace Fulton) and her boyfriend, Boy (Michael Provost).

You can probably guess what happens: Bo and Sandy, college students in California, are on the verge of getting serious. He's invited back to Chitown to meet her family, only to find out her dad is the author of a best-selling book about how nobody's good enough to date his daughter.

Things roll out with few surprises, though a winsome cast and light mood keep things largely low-key and enjoyable. It'd be fair to say this material is much closer to broadcast television than feature film in tone and pacing. You can see the set-ups coming a mile off and wait for them to land with the inevitability of gravity.

Provost and Gulton make for a cute couple -- quite literally. Like if you bumped into them in real life you'd instantly think they were some of the most gorgeous people you'll ever meet. She has just been recruited to be social media influencer for a surfboard product company called Sex Wax (wonder if that'll come up later), while Bo has been offered an assistant director job.

(I don't think that's actually how the influencing game works; they're more akin to freelance grifters who have to work their way up from Yelp reviews to receiving free stuff to actually having people and companies pay attention to them.)

So Sandy and Boy are at a crossroads, considering leaving school, making their thing permanent or taking a break.

Mira Sorvino plays Amy, Sandy's mom and Mark's wife, who acts as a sort of goalie/coach for dad's worst instincts. He's immediately suspicious of Bo and starts to dig into his past, setting his 9-year-old (Sander Thomas) to be his cyber sleuth. He's really upset to find out Bo's mom runs a pot farm, which is a really strange thing for a guy who got rich peddling booze to feel.

Keith David, whose voice is such pure burnished gold that I would literally pay him to read my grocery list to me, shows up as Al, Mark's best friend and head of his favorite bar.

Avery Moss, who has a smile that could melt a frost giant's heart, is plucky as Sandy's kid sister, Carrie. Andres Rosas plays Stephon, the shy bar worker who adores her.

Mucking up the works is Trevor (Belmong Cameli), an old flame of Sandy's who Mark likes and wants to use as leverage to push Bo aside. Trevor's a jock who keeps talking about having a pro football tryout, but we know he's just the designated jerk.

I also liked the warm presence of Aiden Berzins as Taylor, who in the movie plays Mark's adopted son but in real life is his nephew. He's got an uplifting story that gets worked into the film in a nice way.

"Most Guys Are Losers" is a pretty low-budget affair, occasionally hamstrung by some slipshod audio. (In one scene inside a car, they use one actor's on-set recording and the other's ADR, and it's glaring.) Most of the action takes place in the bar, and after awhile we kind of get tired of being in the same noisy space.

Buckley is ostensibly the star of the show, though really the story should belong to Sandy, who also tends to get muscled aside by Bo. Every good dad should know to cede the spotlight to his amazing daughter, even if you didn't write a whole book about it.

Posted by Christopher Lloyd at 4:11 PM