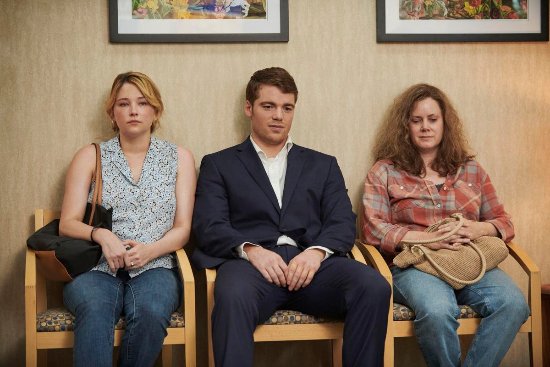 How do you translate to the screen a book that’s not so much a narrative memoir as an evocation of a place, a culture and a mindset? This was the challenge facing director Ron Howard and screenwriter Vanessa Taylor (“The Shape of Water”) in translating J.D. Vance’s best-seller, “Hillbilly Elegy.”

The path they chose was probably the best one laid before them, resulting in a solid if somewhat constructed-feeling look at one man’s journey from the hollers of Appalachian Kentucky to Yale Law School graduate. It boasts a pair of spectacular performances by Glenn Close and Amy Adams, both of whom should get awards notice.

The book came out in 2016 and was quickly tabbed as a political artifact, a wayfinder to the reason why many rural, white lower-class voters chose the way they did. The filmmakers behind “Hillbilly Elegy” wisely eschew any outright political machinations, rightly guessing that any such attempt would come across as a bunch of Hollywood leftists looking down their noses at a bunch of hicks.

Indeed, the biggest strength of the film is that it approaches its characters at eye level. The main dynamic centers around the trio of Vance himself -- played by Gabriel Basso and Owen Asztalos in his 20s and teens, respectively -- his mother, Bev (Adams), and grandmother (Close).

The family moved north to Middletown, Ohio, when J.D. was small, but he spent most of his childhood summers in Kentucky and that’s where their roots lie. The Vances are dirt poor living among others just so, but every clan holds firmly to the belief they’re a bit better than their neighbors.

The story shifts back and forth between the years of J.D.’s childhood and a few days in his life in law school, bucking for an internship at a top Washington D.C. firm. In the latter frame, his motivation is both practical -- he needs the money from a high-end gig to make up the shortfall in his financial aid -- and personal, wanting to stay with his girlfriend, Usha (Freida Pinto), an Indian-American who already has a job lined up there.

In the earlier timeframe, J.D. ping-pongs back and forth between his mom and “Meemaw,” preferring the stability of the latter but emotionally tethered to the former. Bev is a nurse who lost her job due to drug addiction, and the film is unrelenting in depicting how a broken person can be simultaneously fiercely protective and outright abusive of their child.

His only protection is Meemaw, who has a corrosive tongue and rude manner but understands that family is the only thing that really matters. Close is spot-on playing a certain Southern type, the chain-smoking old lady with crazy witch hair who can barely walk but will pin anyone to their spot with a flinty stare and a few acid words.

In the later timeframe, set around 2011, the guileless but graceless J.D. tries to fit in with snooty Beltway types, not knowing the difference between varieties of white wine or which piece of silverware to use at a fancy dinner. At the same time he is summoned back to Ohio to deal with his mom’s latest overdose, as his sister (Haley Bennett) has her own passel of kids and responsibilities now.

We can practically feel the weight of the massive chip on J.D.’s shoulder, a guy who wants to do the right thing but feels blocked at every turn. Basso seems to positively slump onscreen before our eyes. He owes a responsibility to his mother, even though she neglected and abused him horribly, and a loyalty to Meemaw’s edict about being the leader of the family after she’s gone.

There are a lot of things to admire about “Hillbilly Elegy.” It really sings when it focuses on the twisted but unshakeable triad of J.D. and the two women who raised him. It also makes a genuine and largely successful attempt to portray the sorts of folks people in showbiz and politics usually see as zoological exhibits.

It’s also one of those movies where the lead character tends to be the least interesting person in the room. So anytime we wander too far from Bev’s pitiful, manipulative antics or Meemaw’s iron rule, the movie loses air.

Still, Howard, Taylor and company deserve credit for making this movie in the first place, and making it in a way that feels true to the author and the book he wrote. We live in a time where so many are ruled by hatred and fear, and here’s a film filled with those things -- but feels like a small spring of hope.

Posted by Christopher Lloyd at 3:00 PM