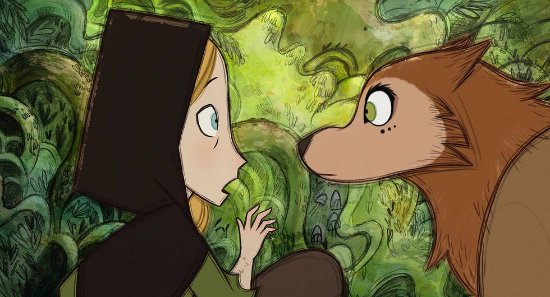 In recent years when the Oscar nominations came out, it often seems like there's an animated feature on the list I hadn't heard of. Some come from Asia, but a surprising number arrive from the Irish studio Cartoon Saloon, the makers of "The Secret of Kells," "Song of the Sea" and "The Breadwinner."

Invariably, I catch up with them later and find out they're some of my favorite animated films of the year. Their newest, "Wolfwalkers," easily takes the lead position as the best I've seen in 2020.

It's hard to describe the breathtaking beauty of this movie. It appears to be largely hand-drawn, though these days some kind of computer-generated effects are often involved for backgrounds or special effects. The colors are incredibly vibrant, a veritable symphony of scarlets and oranges and yellows.

It's a very deliberately 2D effect, which is accentuated during a number of sequences when the action changes to an overhead perspective of a location whilst the characters are still at eye-level to us, sort of like a medieval painting of soldiers inside a walled castle or whatnot.

That fits the setting of the city of Kilkenny during the dreariest part of the Dark Ages.

Robyn Goodfellowe (voice of Honor Kneafsey) is a sweet but willful girl of about 10 who dreams of becoming a mighty hunter like her father (Sean Bean, surprisingly emotive). But most girls are tasked with working in the scullery, something Robyn eschews for practicing with her crossbow and sneaking off into the forbidden woods with her pet raven, Merlin.

The Lord Protector (Simon McBurney) wants to raze the forest to make more room for sheepherding and farming, but a stubborn pack of ghostly wolves harries them. Goodfellowe is tasked with killing them, but has been a miserable failure. Meanwhile, the Irish townsfolk are already in a state of agitation about their English overlords, and whisper stories about wolfwalkers who are part human, part wolf.

It turns out these stories are only partly true. Upon venturing in the woods Robyn meets Mebh (Eva Whittaker), a little girl with a fiery canopy of hair who seems completely feral. She tells Robyn that wolfwalkers like her are not werewolves, but their wolf spirit breaks free of their sleeping body and runs free.

I loved the light and sound effects used for the wolfwalker magic -- it's almost like liquid gold waiting to spill out of their skins. Mebh can control the wolves and even heal wounds by howling keenly.

Mebh's mother (Maria Doyle Kennedy), the leader of the pack, has been sitting unawakened for many months now, her wolf spirit apparently lost or worse. Robyne resolves to help them, increasingly putting her at odds with her father and the steely Lord Protector.

Director Tomm Moore helmed the three movies previously mentioned, and brings in Ross Stewart as co-director. The screenplay is by Will Collins based on a story about Moore, Stewart and Jericca Cleland. It has aspects of the fairy tale genre but also has a modernist immediacy with its themes about alienation and accepting those who are different from us.

The music by Bruno Coulais is just lovely with traditional Irish strings and flutes by the folk group Kila. There's also a song, "Running with the Wolves" by Norwegian singer Aurora, that should get serious awards attention.

Same goes for "Wolfwalkers" as a whole, which will appear on the Oscar short list for animated feature, or there's something wrong with the voting system. This is a story of magic and mystery, heart and grace -- human, and otherwise.

Posted by Christopher Lloyd at 5:23 AM