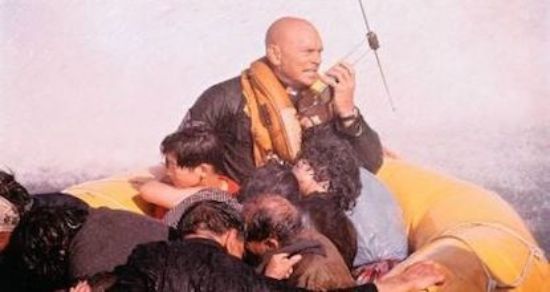 When it comes to war films, I often feel like the kid in "The Princess Bride," his little face screwed up into a perpetual pout -- "They're kissing again."

I don't know why Golden Age Hollywood felt like it couldn't make a war picture without ladling in a huge dollop of gooey romance. Particularly in the 1950s and thereafter. In the years immediately after World War II, there were some great, gritty dramas that focused solely on the combat and existential peril of the soldiers -- like the wonderful and under-appreciated "Battleground."

But with 1953's "From Here to Eternity" and beyond, it seemed like the movies couldn't separate the fighting men from their dames. A perfect example is "Flight from Ashiya," which is supposed to be a paean to the U.S. Air Force Air Rescue Service, which retrieved military personnel and private citizens from perilous situations. Their motto, as we're reminded several times, is "That Others May Live."

Apparently, the unwritten sub-motto is "That We May Smooch."

Director Michael Anderson ("Around the World in 80 Days") and screenwriter Waldo Salt, working from Elliott Arnold's 1959 novel, use the rescue stuff as the mere backdrop to lovey-dovey stories. The movie actually spends the majority of its running time in flashback to the backstories of the three main characters played by Yul Brynner, Richard Widmark and George Chakiris.

Chakiris was the youngest and least-established of the actors, despite having just won an Oscar for "West Side Story," "Flight" being only his second starring role. As such, his tale as Lt. John Gregg gets the short shrift, focusing on a helicopter rescue attempt some years earlier in the European mountains following an avalanche. After only being able to carry out a handful of the survivors, Gregg insists on a second attempt, but the sound of his rotors causes another downfall, killing the rest. Now he's shaky behind the controls.

His was the first flashback presented, so I was lulled into a sense that the other two men's histories would also focus on their professional exploits. All we know thus far is that Sgt. Mike Takashima (Brynner) is a gung-ho Polish/Japanese-American paratrooper and Col. Glenn Stevenson (Widmark) is a cautious group commander in the South Pacific who was a prisoner of war of the Japanese, and harbors racial animus against them.

"These things run deep," he confesses to Takashima after they have an inevitable run-in.

It's interesting -- Brynner was widely regarded as Asian by American audiences, mostly owing to his most iconic role in "The King and I," both on stage and screen. He was actually Russian, with some Swiss but also Mongol ancestry. Brynner, a notorious teller of tall tales, provided various mythologies over the years about his background, helping elevate the sense of the exotic for his screen persona.

(He also had hair, or at least some, but after "The King and I" made him an international star he continued to shave his head for the rest of his life for the same reason.)

In the framing story set in the early 1960s, the three men are flying in propeller seaplanes to rescue some Japanese survivors of a sunken ship.

(The film was a Japanese/American co-production, and I guess you could technically argue it's not a war picture since it's ostensibly set in peace time.)

After the first plane attempts a landing in stormy seas and breaks up, Stevenson has to weigh whether to risk his crew to rescue hated Japanese, with Gregg as his co-pilot and Takashima as the guy who jumps into the drink.

For Stevenson, the flashback -- which must last at least 30 minutes -- involves his romance with Caroline (Shirley Knight), a reporter and photographer covering the Philippines in 1941. He was the owner/operator of a one-man airline delivering needed supplies to the war-torn villages, and she hopped a ride, changing out her skirt for a pair of his borrowed pants.

Of course, he instantly fell in love and later tracked her down. They married but she died, along with their unborn son, in a Japanese POW camp because the commander refused to share their medicine.

Knight is a coy, intriguing presence. On one hand Caroline is a brave proto-feminist war journalist who, at one point, is ready to ditch Stevenson because neither one is the type to be tied down. But she also displays a sensuous, subservient manner that's closer to breathy Marilyn Monroe than edgy Kate Hepburn.

Brynner's love story takes place in Algeria during the war, where as a volunteer with a French demolitions unit he falls for Leila (Danièle Gaubert), a girl from a strict Muslim family. He instantly falls for her after she removes her veil, then reveals much more by taking him to the beach to cavort around in a black bikini.

This may seem incongruous behavior, but a helpful café owner explains that in this spot, various cultural impulses of the East, West and Africa tend to collide and mix.

Gaubert isn't really given the opportunity Knight is to create a fleshed-out character, mostly consigned to forlorn glances and such. Leila only speaks French, so she and Takashima have to bother a shop owner to translate for them.

Leila's father and grandfather naturally disapprove, he tries to take her with him when the Axis forces attack, she follows him in a fit of passion and dies in an explosion from charges Takashima rigged himself.

So both of the older men are carrying major torches for dead loves, though Takashima has a barely acknowledged thing going in the present-day story with Lucille (Suzy Parker), who works in the air rescue HQ.

The filmmakers do a pretty good job of making Widmark seem younger during his flashback, the harder edges on his iconically angled face softened by makeup and lighting. Brynner looks exactly the same though, like the bald pate, his seeming agelessness was an intrinsic part of his schtick.

Eventually the movie wanders back to the story at hand, rescuing the Japanese castaways. After parachuting in and transferring them to an inflatable raft, Takashima instantly bonds with a Japanese boy he names Charlie (Mitsuhiro Sugiyama), who calls him "G.I."

The obvious sound stage water tank set isn't terribly convincing as a stormy ocean, with wind machines blowing spray past the actors' heads at 30 m.p.h. but the water moving at barely a heavy chop. At one point Takashima dives overboard to rescue Charlie, then nearly drowns himself, which is hamfistedly used as the break point for his flashback.

Of course, as you might guess Stevenson overcomes his caution and racism -- for a bit, at least -- to land the plane and rescue everybody.

There's some interesting technical stuff that interests me about the movie because of my own family history in aviation. For ocean takeoff the crew attaches booster rockets to the exterior of their Grumman HU-16 Albatross like a schoolboy soda can trick -- something that sounds like Hollywood BS but was a real thing: JATO (jet assisted take off). Variants of the Albatross are still in use today.

When "Flight from Ashiya" actually bothers to focus on the derring-do of Air Rescue Service pilots and personnel, it's a pretty riveting story. The smoochie stuff doesn't really fit, though, and would've better been dropped for weighing down the film's flight profile.