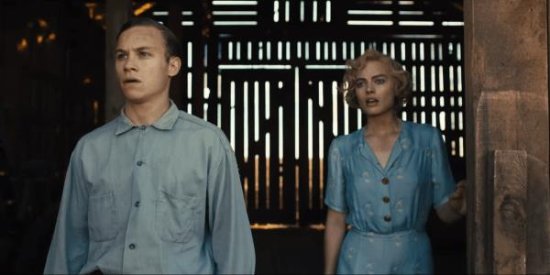 Hollywood has always loved outlaw movies, almost since the very first celluloid clacked through a projector, and since "Bonnie & Clyde" in 1967 it's had a particular fascination for doomed couples on open-sky crime sprees. It's been imitated countless times, from the gritty "The Getaway" to the hazy, dreamlike "Ain't Them Bodies Saints."

"Dreamland" is closer to the latter, a story less concerned with the actual mechanics of robbing banks than the inner emotional journey of its two protagonists. It's an astonishingly beautiful film, set in the 1930s Texas dust bowl, with cinematographer Lyle Vincent's vibrant warm hues giving way to nearly colorless stretches of gray-brown.

You could snip out most any frame of the movie and have a nifty postcard keepsake.

Margot Robbie stars as Allison Wells, a notorious bank robber on the run after things went to hell on her last job. Several people were killed, including a little girl and her lover/partner in crime, Perry (Garrett Hedlund). The lawmen and newspapers have been playing her up as a cold-hearted she-devil, though she's got another story to tell. Actually, several versions of it.

Robbie's blue eyes and tawny skin seem to fill the screen like a small sun, hurtling toward burnout.

Shot in the leg, Allison holes up in the barn of 17-year-old Eugene (Finn Cole), a kid with his nose in the dirt and head in the clouds. He steals detective comic books and dreams of reuniting with his long-departed father, who ran out on them when he was little and moved to Mexico.

He loathes his deputy stepdad (Travis Fimmel), who wears a strange, vaguely Hitler-esque haircut. His own blue eyes are the icy counterpoint to Allison's heat. Gene does have a soft spot for his hard-pressed mom (Kerry Condon) and kid sister, Phoebe (Darby Camp).

The wonderful Lola Kirke provides the narration as Phoebe's grown self looking back long years to the events that took place in 1935.

There really isn't a whole lot of story to speak of. Director Miles Joris-Peyrafitte and screenwriter Nicolaas Zwart concentrate on setting up situations and character impulses, and then seeing how the pieces will move around on their own.

We know that Gene will be completely ensorceled by Allison, and she will do little to discourage this sentiment so long as he's helping her hide out and heal up. And that the $20,000 bounty on her head will lead the locals to start closing in on the couple, with Gene's stepdad as the head bloodhound.

And eventually, she will need to move on and Gene will go with her. I'm not giving anything away; the narration says as much in the very beginning, Phoebe talking about the legend of her brother and "the Wells woman."

I just loved the look of this film, with great attention detail paid to the frayed edges of the people's clothing, the rusty screws in the bed of the family truck and the slight sheen of sweat that hangs on people's foreheads to remind us of the Texas crop-killing drought.

When things go south, people tend to get squirrelly, acting normal on the surface but ready to jump at the slightest chance to change the dire direction of things -- even if it chances things getting worse. Gosh, that sounds familiar...

Even the smallest supporting actors are right in the groove, never altering the sense of well-worn authenticity. I especially liked Stephen Dinh as Joe, Gene's American Indian friend looking for his own way out, and Joe Berryman as the gimlet-eyed local sheriff, who eats BS for breakfast.

There's one terrific sequence where Gene goes off to take a peek at the evidence the police have against Allison while everyone is at a town dance, as an old-timer performs energetic hambone -- percussive knee-slapping and such -- supplying the tension-building music underneath. Marvelous.

The film does seem to be missing a few pieces, a little more backstory for Allison and more about Gene's longing for his dad's memory to fill out the connective tissue. In an age where I'm constantly harping about how many movies are too long, here's a handsome one that needed a little more fat on the bone.

Posted by Christopher Lloyd at 8:34 PM