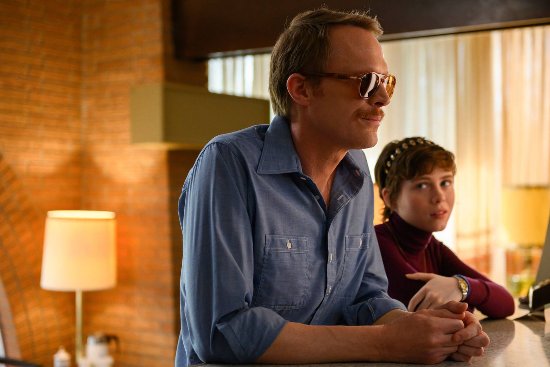 "Uncle Frank" is one of those movies that is heartfelt, splendidly acted and as predictable as a sunset.

It's written and directed by Alan Ball, who won an Oscar for the screenplay for "American Beauty," which was something truly original and even subversive. In "Uncle Frank" he has created something utterly maudlin that wraps itself in a blanket of self-regard.

Paul Bettany plays the titular character, a man from South Carolina who moved to New York City because he was smart and gay. The smart part we figure out pretty quickly, and soon thereafter the gay smart. We can tell this from the very first scene because while home for his father's birthday he gives thoughtful gifts, doesn't yell at the children or watch football. Gay!

I just hate, hate, hate these movies that present everyone from the South as walking caricatures. Stephen Root plays the dad, whose contempt for his own child is so palpable it practically manifests into physical form. It's never explored, simply presented for effect.

Steve Zahn plays Frank's brother, Mike, well on his way to following in dad's hateful, hurtful footsteps. Judy Greer is his wife, Kitty, and Jane McNeill plays his sister, Neva, who is the one who "knows" about him. The great Margo Martindale plays his mother, who mostly stays in the kitchen but has a big heart.

Lois Smith turns up as the batty Aunt Butch, and I'll just let that name sit there where it belongs.

The person Frank is Uncle to is Beth, Mike and Kitty's daughter, played by Sophia Lillis, who you may remember from her terrific performance as Beverly in the first "It," the first one that wasn't terrible. It's doubtful you'd remember her if "Uncle Frank" was the first thing you saw her in, because the script gives her almost nothing to do but observe and be present.

When Beth was a mousy kid, Uncle Frank counseled her to get out of Creekville and be whoever she wants to be, rather than what others expect of her. So a few years later she hightails it to New York University, where Frank is an English professor. Of course, he's not taking his own advice, living in the closet even though he's been with his boyfriend, Wally (Peter Macdissi), for a number of years.

The story is set in 1973, which was an interesting time to be gay. After the Stonewall Riots, the LBGTQ community (as we call it now, but not then) was in the pubic conscious for the first time, though usually relegated to cheap jokes in TV and the movies. Down South, though, the movie presents homosexuality as still a fire-and-brimstone offense, worthy of shunning or even stoning.

Of course, once things turn around for Frank and his family -- as we know they must -- the womenfolk will come around with stories about how their hairdresser or friend from school is also "that way" ... and it's really no big deal!

That seems to be the big takeaway of "Uncle Frank": being gay is no big deal!

I liked Bettany, playing a sort of morose man who takes things in stride as best he can. He puts on a serene front of a self-assured intellectual, but deep down his dad's hatred -- along with a teen romance we learn about in flashback -- weighs heavily upon him.

The precipitating event is Frank's father's death, the subsequent road trip home with Beth for the funeral, and the expected revelation of his sexual prefer... orientation! I mean orientation! Because Webster's tells me so, or at least it does now (after some recent, hasty changes).

Wally follows along, and Macdissi is the one breath of fresh air in the movie, playing an Arabic man who is confidently, openly gay. Always with a smile on his face, an open ear and a hug at the ready, Wally is light years ahead of Frank in terms of his personal journey. He's willing to wait around for Frank to catch up, but not forever.

I realize as I'm wrapping up that it sounds like I hated this movie. I didn't. It's a fine effort. The cast is splendid, and I'm a sucker for any movie featuring lots of vintage cars. It never drags and a few sections are genuinely enjoyable.

If it's possible to like everything about a movie except its basic premise, then "Uncle Frank" is it. Maybe this is the sort of visceral disconnect people had with "Green Book" that baffled me. A man coming out to his family in 1973 just doesn't seem like very daring or even interesting subject matter for a film in 2020.

I think maybe if the Frank-Beth relationship was what really drove the story, I'd feel different. But she winds up being a blank slate who's still mostly blank at the end. Though she does get one humdinger of a one-liner while visiting an auto repair shop. If Ball had kept things going with her, or given Beth her own parallel obstacles to overcome, then Frank's anguish would seem more palpable.

Instead, she's pretty much relegated to the background for the back half of "Uncle Frank." Meanwhile, Frank wrestles with his dad's ghost and his own bitter memories, and the end point of his trip might as well be a flashing billboard everyone can see way, way off.

Here's a movie that never kept me guessing.

Posted by Christopher Lloyd at 5:25 PM