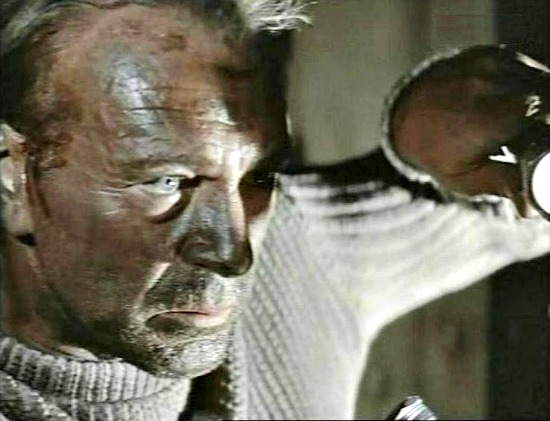 "The Wreck of the Mary Deare" starts off as a seaborne action/adventure, turns into a character study and winds up as a staid courtroom drama/whodunit -- with a little splash of excitement at the end.

It's a well-made but schizophrenic film with jarring segues between land and sea. The movie is mostly notable today for marking the end of Gary Cooper's film acting career, the peak of Charlton Heston's and the beginning of Richard Harris'.

Alfred Hitchcock was originally slated to direct, but couldn't find a way to prevent it from turning into a courtroom procedural without jettisoning much of the novel by Hammond Innes. Hitch and his writer, Ernest Lehman, turned the project over to screenwriter Eric Ambler and British journeyman director Michael Anderson (“Around the World in 80 Days”), who pressed on.

Cooper suffered ill health during a big chunk of his latter years, and would be diagnosed with the cancer would claim his life shortly after the release of "Wreck." Despite having to suspend shooting several times due to his illness, Cooper still mastered a physically demanding role as Gideon Patch, a disgraced seaman trying desperately to retain his honor -- and keep his captain’s license -- after the ship under his command is abandoned by the crew.

He would only make one other film, “The Naked Edge,” before his death at age 60.

As for Harris, it was his first major film role – and nearly his last, at least on this side of the Atlantic. He hated the Hollywood filmmaking experience so much he returned to England straight away and eschewed American productions for years.

Harris plays Higgins, the devious second mate of the Mary Deare, who’s secretly working in cahoots with the owner to scuttle the ship to hide the fact the expensive cargo, some newfangled airplane engines, had already been offloaded in Rangoon. The captain had been lost at sea right before, and Patch, as first officer, took over.

Heston plays John Sands, a salvage team member who first sees the Mary Deare as a huge payday, an intact cargo ship floating dead and abandoned in a stormy sea. He clambers aboard to find Patch shambling about the decks like a ghost, covered in soot and muttering about the crew jumping ship even though the fire that caused the panic had been contained.

He has a large cut on his head from being brained by one of the crew (probably Higgins) and spends his first stretch of screen time seeming addled or senile. He orders Sands to help him beach the rapidly sinking ship on the Minquiers (aka "the Minkies"), a series of teeth-like rocks in the English Channel. Then, Patch extracts a promise from Sands not to tell anyone about the fact that the ship isn't at the bottom of the ocean until the official board of inquiry. He implies Sands will receive full salvage rights in return.

We spend the middle part of the movie wondering wondering about these two men -- whether Sands is merely a soulless mercenary, and if Patch's motivations are truly what he says. We learn Patch previously lost another ship under his command and had his license ("master's ticket") suspended. Another screw-up on his watch would mean the end of his career.

He sets about what seems very much like a cover-up: refusing to answer questions by the insurance company or owner of the ship; seeking out the daughter (Virginia McKenna) of the dead captain to see if he has letters that support his claim; renting a fishing boat so he can secretly go out to the wreck on his own; obscuring the full truth from Sands and his partner, which includes the fact Patch accidentally killed he captain when the latter attacked him in a drunken rage.

Then we arrive at the courtroom sequence, during which things look worse and worse for Patch. The rest of the crew testify he gave the order to abandon ship, though Patch denies it. He wants to read a statement before the court to explain everything, including revealing the fact the ship was not sunk.

When this is discovered independently by other salvage crews -- thus depriving Sands of his payday -- it seems Patch has no allies.

The last sequence sees Sands and Patch joining forces again to secretly dive through the holes in the ship's hull to investigate if the airplane engines are still in the hull of the Mary Deare. Cooper, an experienced scuba diver, did his own stunts.

The movie is tied together only by the inimitable screen presence of Gary Cooper, whose ease at projecting a sort of plain decency allowed him to be one of the few actors to bridge the silent and sound film eras. We probably suspect Patch is going to turn out to be a hero, since that's the only kind of character he played.

Gideon Patch is a more brooding sort, but the outcome of "The Wreck of the Mary Deare" is never in doubt.