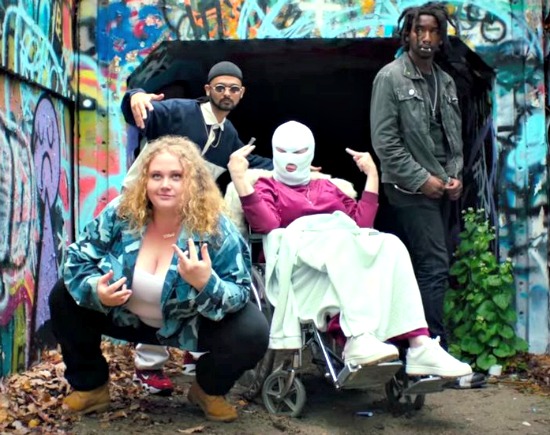 Patricia Dombrowski has a lot of nicknames. She prefers “Killa P,” though most call her Patti, which she has bedazzled up to “Patti Cake$,” which is also the title of the movie about her.

The license plate on her crumbling Cadillac is “PATTIWGN.” A 23-year-old aspiring rapper from the harder Jersey neighborhood, she and a fellow dreamer go by “Thick & Thin,” a reference to their respective body types. The one she really hates, though she pretends to embrace it when it’s hurled at her incessantly on the streets, is “Dumbo,” given in middle school and unfortunately what stuck.

One guy, whom Patti secretly has a crush on, disparagingly calls her “White Precious” during an impromptu rap battle, and that’s probably the one that’s most descriptive.

This audacious debut film from writer/director Geremy Jasper and starring Danielle Macdonald is in many ways an inheritor to 2009’s “Precious,” which spotlighted an obese, illiterate girl. It also borrows from “Hustle & Flow,” in that it’s the story of a person rapping about their circumstances and stuck dreams as a way of breaking out of the crabbed role other people have defined for them.

The movie is not so much about Patti being fat as the disparagement that comes with it. Patti has spent her whole life being told she’s less than because of her outsized body. That dynamic has bled into her work, her relationships and every other aspect of her existence. She’s come to internalize that pain, forge it in the fire of her resentment and spit it out back into the world in the form of brash, boastful raps.

“Patti Cake$” is not about overeating, but feeding an undernourished soul.

Macdonald is astonishing in the lead role, her broad face often buried underneath a tangle of blonde frizzles, her eyes peeking out with a mix of fear and self-assurance. We feel the crush of how others disregard her, sense the artist behind the façade of the woman who bartends and works catering events, intuitively understand her need to strive for something more.

Her best friend is Hareesh (Siddharth Dhananjay), a pharmacist and her rapping partner. He’s the ebullient ying to her downtrodden yang. They hang out, bust some rhymes and dream of one day getting onstage. Like most other Jersey kids, black and white, they idolize the O-Z (Sahr Ngaujah), a local rapper who made it big and is referred to as the “godfather,” or simply “God.” Patti has green-tinged dreams about becoming O-Z’s protégé.

Patti’s most fraught relationship is with her mother, Barb (Bridget Everett), a powerhouse of a woman who owns a big personality, big voice and big everything else. Fiftyish, a former rock singer, now a hair stylist with money problems clinging desperately to the shreds of her sexpot renown, Barb has poured all of her disappointment about life into her kid.

Cathy Moriarty shines as her grandmother, laid up by ill health and her own woes, who nonetheless gives Patti encouragement and unmeasured love.

I was also really impressed with Mamoudou Athie as a vagabond musician who reluctantly joins their group, lending his technical expertise and a gentleness that hides behind a deliberately dangerous exterior. Athie has gobs of what Hollywood used to call “presence” -- you can’t not watch him.

The scene where they compose their first song in the unlikeliest of venues, dubbing themselves “PBNJ” with a little sampling help from grandma, is pure magic. These are all people who society has told they’re nothing, coming together to create something.

I’m not a rap aficionado, but it’s hard not to be sucked into the beats and bravura rhymes of the music (by Jasper and Jason Binnick). Highlights are the catchy PBNJ intro song and “Tough Love,” which borrows from and describes Patti’s family dynamics.

“Patti Cake$” is the sort of fine little movie that can get lost in the wasteland of September releases, so I’m hoping it will find the audience it deserves, as well as some attention during the awards cycle.