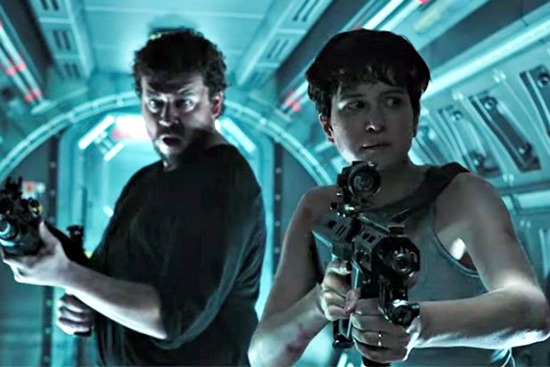 “Not an utter embarrassment” is unfortunately the new bar for films in the “Alien” franchise, and I’m pleased to say the latest iteration manages to clear that low threshold quite easily.

It breaks no new ground and gives us no character as compelling as Sigourney Weaver’s Ripley. But it puts the people through their familiar paces with technical and emotional vitality in a way that will leave audiences not exactly thrilled, but surely not disappointed.

It’s nice that original director Ridley Scott, after seeing his movie pass through the hands of multiple imitators, finally took back the reins himself with “Prometheus” and now this film, which exists as its sequel within the (admittedly somewhat murky) timeline.

The set-up is that a space ship is carrying thousands of hibernating humans (and some fertilized embryos) to a distant solar system to colonize it. When a solar flare damages the vessel, the crew is awakened early – all except the captain, who is incinerated in his sleeping pod.

Not wanting to face the prospect of living and dying before they reach their destination, and too scared to go back into hibernation, the crew settles on a nearby planet that appears to be able to sustain life. Billy Crudup is the fickle second-in-command calling the shots, while Katherine Waterston is the more sensible subordinate who we know will eventually take over.

The rest of the cast includes Carmen Ejogo, Demian Bichir, Amy Seimetz and Danny McBride. Interestingly, the crew is made of matched romantic pairs, so there’s a lot of tension about protecting loved ones and, soon enough, mourning them.

Michael Fassbender returns as an android named Walter assigned to help the humans. He previously played another, more malevolent “synthetic,” David, in “Prometheus,” and that character turns up again, a bit implausibly. Their clashes and ruminations about the mystery of human behavior represent the movie’s high point.

When the planet turns out to be populated with the iconic aliens -- face-huggers that give way to two-mouthed killers -- the blood starts flying, the character clashes grow more intense and the aliens start spreading.

Taken purely as a popcorn flick, “Alien: Covenant” is filled with plenty of creepy, moody sequences set apart by bursts of high-octane action. It’s not like it was in “Alien” or “Aliens,” but it gets a passing grade.

But seriously, when are people going to figure out the thing that made the first two “Alien” movies great was not the critters, but Ripley? Maybe Scott or somebody will realize Weaver is still around, and still pretty spry.

Bonus features are pretty substantial, starting with a feature-length commentary track by Scott. It’s bothersome that so many storied directors -- Spielberg, Coppola, etc. -- have refused to do commentaries. He also takes part in a “Master Class” documentary on making the film.

There are also a dozen deleted or extended scenes, gallery of production photos, and six making-of featurettes.