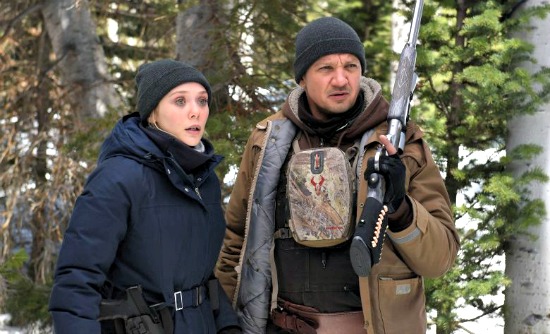 “I know you’re looking for clues, but you’re missing all the signs.”
--Cory Lambert


Last year’s “Hell or High Water” was my pick for the best movie in a very good film year, and writer Taylor Sheridan is back with another superlative crime drama for late summer, “Wind River,” which he also directed.

Sheridan, who also wrote the screenplay for “Sicario,” has quickly become the most authoritative voice of the modern Western. His stories are ones of revenge, the pioneer code, paying for old debts. They’re very old-school, male-centric films, yet this one also has a strong female character near the center.

Moving from West Texas to the Arapaho/Shoshone Indian reservation of hardscrabble Wyoming, “Wind River” is steeped in Native American culture but has two Caucasian main characters. I’m sure some people will find that politically objectionable for its own sake, but the very theme of the film is about strangers -- the interlopers who barge in, and the outsiders within our own midst.

This is not one of those reservations with a big casino and fat gold belt buckles. It’s a land of bitter cold and bleak mountains that keep people apart. They huddle in mobile homes against snows that pile deep even in spring, drowning in drink, drugs and despair. A fleeting shot shows some locals burning pieces of their house to stay warm.

Cory Lambert is very much integrated into this community. A hunter of predators for the federal Fish and Wildlife Service, he roams the land on a snowmobile, tracking deadly beasts that prey on livestock and, occasionally, people. He’s searching for some lions that took down a steer on his father-in-law’s ranch when he finds a teenage girl’s body in the snow.

She’s beat up and barefoot, and the frostbite extends up to her ankles -- telling you how far she walked before finally falling. “That’s a warrior,” Cory intones.

This is the first role since “The Hurt Locker” that gives Jeremy Renner full rein to explore a character from the inside out. A f’real cowboy -- he trains his own horses, makes his own bullets and favors a lever-action rifle over modern snipers -- Cory doesn’t talk much but speaks volumes. There’s a lot of hurt in his own life, and his marriage to a Native woman (Julia Jones) has crumbled.

Elisabeth Olsen plays the intruder, Jane Banner, a young FBI agent sent out from Las Vegas to investigate the death. She’s resilient and smart -- shrewd enough to know she’s completely out of her element in a land where six reservation officers patrol a land the side of Rhode Island, and screaming winds and 20 degrees below zero can cause lungs to bleed, and then freeze.

Jane recruits him to be her scout and tracker, though Cory clearly has his own ideas how the investigation is going to play out. Visiting the dead girl’s father (an amazing Gil Birmingham), Jane clumsily displays her privilege and presumption, seeing the man’s pride and stoicism, and interpreting that as hardheartedness.

When Cory shows up and the dad melts into his arms, we’re as astonished as she is. They share a connection no one else can.

Acting as facilitator is Graham Greene as the reservation police chief. He knows the people and wants to do the right thing, but also understands that his job will continue after the feds have gone back home. “Hey, don’t look at me. I’m used to no help,” he says.

They follow the tracks in the snow, which leads to questions, which suggest possible answers.

If “Hell or High Water” was a bona fide masterpiece, then “Wind River” is just a half-step down. It doesn’t quite have the same narrative momentum, tending to pool in eddies of contemplation rather than driving a potboiler plot.

But this approach has its own rewards, as in a scene where Jane goes into Cory’s home, and we sense the pull between them and think we know what’s going to happen. But it’s another form of intimacy that takes place, where the leathery gunman opens up his heart in a way we can’t possibly imagine John Wayne doing.