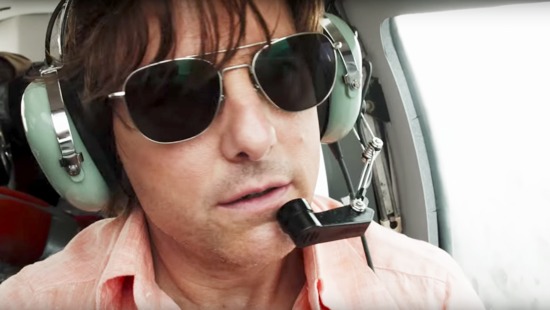 How much of “American Made” is true and how much is Hollywood hokum?

There’s certainly a healthy helping of the latter, as even a cursory glance at the life of pilot/smuggler/government informant Barry Seal shows. You could go into quibbles -- the movie shows him as married with small kids, but he was already long divorced (twice) when the events depicted commence.

The main departure, though, is showing the “gringo who always delivers” -- drugs, rifles, people, whatever -- as a pawn of the CIA who more or less fell backwards into a massive elicit transport operation. Everything I’ve been able to read in short order about Seal shows he’d already been a smuggler for years, and only went to the feds when he was facing major jail time, offering to be their stooge.

But this is a Tom Cruise star vehicle, not a historical docudrama. The film mostly reminded me of “Blow,” the 2001 film starring Johnny Depp as an unheralded key figure in bringing the South American drug trade to our shores. Seal has actually been depicted on film and television a number of times before, including by Dennis Hopper and Michael Paré.

Taken on its own, “American Made” is a fun, dizzy and convoluted movie that shows how deeply the U.S. government was involved in the mess south of its border in the late 1970s and early ‘80s, and indeed to what a large extent those problems we created, as the title suggests.

Cruise smiles and twinkles through it all, affecting a Louisiana drawl to intermittent effect. Director Doug Liman (“The Bourne Identity”) and screenwriter Gary Spinelli set out deliberately to portray Seal as a lovable scamp, when a harder edge is probably required. But aside from one brief foray I can recall, “Collateral,” outright villainy just isn’t in the Tom Cruise toolbag.

The net effect winds up feeling like “Goodfellas” Lite, with the Colombian Medellín Cartel swapped out for Italian gangsters.

The story opens in 1978 with Seal bored with his life as a TWA commercial pilot. (False: the airline had actually fired him six years earlier.) A mysterious young CIA agent, Schafer (Domhnall Gleeson), busts him for sneaking Cuban cigars into the country and offers to set him up with his own hangar and high-end plane.

His job: reconnaissance photos of Sandinistas and other Communist-backed insurgents. A cowboy at heart, Seal enjoys the daredevil flying and even getting shot at. But the money’s not so great, and when Jorge Ochoa (Alejandro Edda) and Pablo Escobar (Mauricio Mejia) offer to pay him $2,000 per kilo of cocaine he flies into America on the way back from his CIA missions, he has a hard time saying no.

Before long, Seal is running other pilots in and out of South and Central America on virtually a daily basis, picking up guns, trading them for dope, and dropping the drugs in the Louisiana delta. He sets up a network of front companies in tiny Mena, Ark., but still accumulates so much cash that he literally runs out of places to hide it, stuffing it in horse stalls or burying it out back of the house.

“I’ll rake it up tomorrow,” he says when his wife (Sarah Wright) tells him one of his stashes has been breached, cash blowing all around.

Jesse Plemons play the local sheriff paid to look the other way; Caleb Landry Jones is Seal’s idiot brother-in-law whose screw-ups start the downward spiral; Jayma Mays is the state attorney general who wants his head on a platter; Benito Martinez is the head of the DEA, who ratchets up Seal’s involvement straight to the White House.

“American Made” is a tragicomedy about our great nation, worried about getting mired in another Vietnam, creating a smaller version in our backyard. It’s so funny, it hurts.