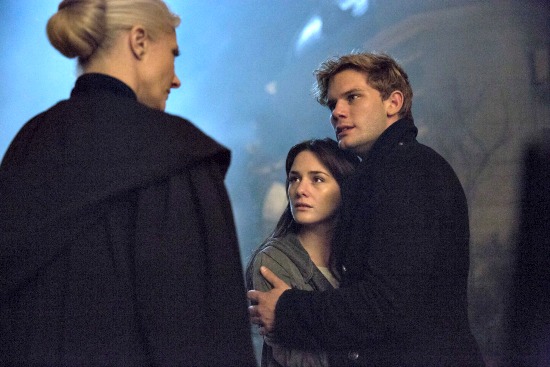 “Fallen” has formula written all over it.

It’s a supernatural teen romance/adventure flick based on a (they tell me) popular YA novel by Lauren Kate. The main character is a teen girl who’s new to town and uncertain of herself, falling hard for a mysterious golden boy who turns out to be Much More Than He Seems.

There’s even a darkling competitor for her affections, who’s dreamy but not quite as dreamy as Much More boy.

You can criticize the “Twilight” movies, but at least the main actors were all within hopping distance of the ages of their characters, at least when the first movie came out. “Fallen” has Hollywood’s usual cast of 25- to almost-30-year-olds playing 16 and 17.

The film’s production and release has been troubled. It originally was supposed to come out almost two years ago, finally got dribbled out in places like Singapore and the Philippines last year, the United Kingdom this spring and is now being given a brief U.S. release before coming out on video 3½ weeks later.

Despite the tragic birthing process, I have to admit the movie isn’t bad. It’s got a solid cast, including Addison Timlin, Jeremy Irvine (“War Horse”), Joely Richardson and Lola Kirke, who was wonderful in the little-seen “Mistress America.”

Timlin plays Lucinda Price, a smart girl who’s been tormented by shadowy visions that have left her enrolled by court order in the Sword and Cross reform school. It’s housed in a massive castle where it’s always autumn and the gardeners never seem to keep up with the leaf-raking. She quickly runs afoul of the resident goth girl/bully (Sianoa Smit-McPhee), but befriends nerdy nonstop-talker Penn (Kirke).

Luce is immediately smitten with Daniel (Irvine), the handsome boy who spends all his time doing charcoal drawings in class. He pretends to ignore her or is even outright hostile, but their spark can’t be denied.

(I, for one, am happy to see a movie in which a fair-haired lad is the object of affection. Us blond boys have had a rough romantic run at the movies as of late.)

Harrison Gilbertson plays Cam, the long-haired (brunette!) bad boy who always seems to be in trouble with the law or teachers. He makes his own play for Luce and she responds, if for no other reason than the contrast with Daniel’s indifference.

Richardson plays the philosophy and religion teacher, whose curriculum seems to center entirely on biblical stories about the “Fallen” -- angels who chose neither God or Lucifer’s side in the great battle of heaven. Preferring the sanctity of human love, they’re cursed to roam the Earth in human form.

It’s not often you see a movie actually lay out its entire metaphysical blueprint -- in a classroom, no less -- so there is no confusion about who’s playing what role in the larger story.

Even though it contains few surprises, “Fallen” really isn’t that awful as teen romances go. Nobody sucks any blood or turns into a wolf, though don’t be surprised if some celestial CGI wings make an appearance near the end. It ain’t heaven, but it’s a long ways from hellish filmmaking.