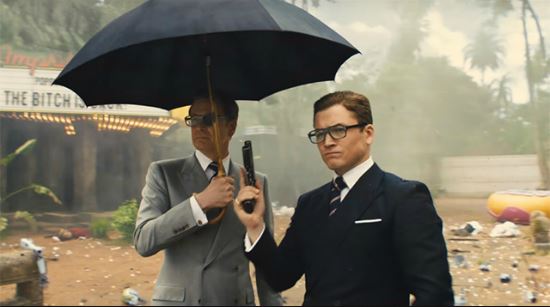 Well, that was disappointing.

I absolutely adored 2015’s “Kingsman: The Secret Service.” It was a dizzy, daffy parody of the spy genre that nonetheless was in unabashedly in love with cool gadgets, dastardly plots and slo-mo action scenes. And it featured a bunch of dashing guys in swanky British suits to boot.

So here comes the sequel, subtitled “The Golden Circle,” using the same core cast and creative team, and it’s a discombobulated hot mess of a movie. It's like going to a party where you like all the people, but somehow the conversations are lame.

What I enjoyed about the first film was the brash, giddy tone that combined R-rated mayhem with sharp comic zingers. It featured Colin Firth as Galahad, the oh-so-suave top agent of the Kingsmen, a private spy agency working secretly to keep the world safe. Their cover is as tailors, so they all sport the same style of clothes, right down to the striped tie and spectacles, which double as X-ray goggles and tactical display.

So why does the follow-up go so awry? Director Matthew Vaughn is back along with his co-screenwriter Jane Goldman, based on “The Secret Service” comic books by Mark Millar and Dave Gibbons. Firth also returns -- despite the slight inconvenience of Galahad being killed in the last movie -- along with Taron Edgerton as Eggsy, his young Cockney protégé, and Mark Armstrong as Merlin, their Bond equivalent of Q, the master outfitter.

I’m not giving anything away by saying that Galahad does indeed turn up again, missing an eye and most of his memories, though he does put all the pieces back together again in the end.

It’s also not a spoiler that the Kingsmen are attacked and mostly wiped out by this movie’s villain named Poppy, a bubbly billionaire drug dealer played by Julianne Moore, who’s built her own 1950s nostalgia town in the middle of a remote jungle for reasons that are never entirely clear. Her signature thing is burning a solid gold emblem onto her henchmen.

She’s got some robot guard dogs, a huge meat grinder (guess where that's heading!) and a plan to poison the entire world population of drug users, holding their lives hostage unless the U.S. president (Bruce Greenwood) legalizes narcotics.

Never mind that that would immediately put her out of business. But the conniving POTUS -- who seems to be a cocktail of the worst traits of Clinton, Bush and Trump -- has his own chess move to make.

The other big twist is that Galahad, Eggsy and Merlin team up with their American counterparts, the Statesmen, who are in the whiskey business and dress as drawling cowboys. I guess the Brit filmmakers don’t understand the difference between Kentucky and Wyoming.

Jeff Bridges shows up as their boss, and we think Channing Tatum is going to team up with the Kingsmen, but then something happens. Their real pardner is Whiskey (Pedro Pascal), who carries a mean electrified whip and a few grudges of his own. Halle Berry plays Ginger, their counterpart to Merlin, who secretly yearns to get into the field.

The action scenes are energetic and fun, as the camera swoops around the combatants, the speed picking up and slowing down as needed to highlight an especially nifty move. This movie’s not nearly as gory as the last one, which may be a relief to some but was a letdown for me.

Elton John shows up as himself, kidnapped by Poppy and forced to play his songbook for her entertainment, right down to the iconic feathers-and-star-glasses outfit. It’s one of the most bizarre celebrity cameos I’ve ever seen, bloated and peevish and dropping f-bombs all over the place. I can’t imagine Sir Elton needs the money, so somebody must have talked him into this.

I haven’t even mentioned Poppy’s cyborg lieutenant, Eggsy’s Swedish princess girlfriend or the European rock concert where a tracking device is implanted in a very squirmy location. This movie has too many characters and a lot of moving parts, and many spin merrily in their own, untethered orbits.

“Kingsman: The Golden Circle” feels like pieces from three or four sequels, cut into bite-sized pieces that aren’t enough to satisfy and don’t taste good together.