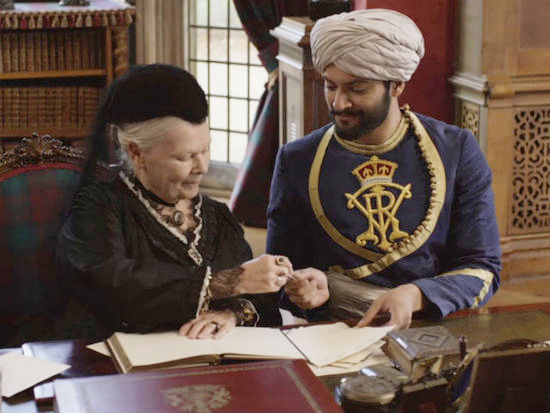 “Victoria & Abdul” is one of those beautiful true stories that sounds too fantastical to have actually happened. Indeed, many people deliberately tried to hide the tale and succeeded in doing so, until the truth came out many decades after the principles were dead.

Directed by Stephen Frears from a screenplay by Lee Hall, it’s a tale of love and friendship between a powerful monarch and a lowly servant from across the globe. In a lot of ways, it reminds me of “Driving Miss Daisy,” in that it shows how people from different backgrounds and stations can grow very close without romantic love -- and how that sort of bond threatens other folks.

During the last 15 years of her life, Queen Victoria of England had an Indian Muslim man as her attendant. He waited upon her as a servant, but the relationship developed into friendship as he taught her about his homeland, of which she was the Empress, as well as the Urdu language. She called him “the Munshi,” or teacher.

The entire British court was scandalized by this, including her heir, the Prince of Wales, who worked actively to undermine the man, Abdul Karim. When his mother finally died, the Munshi and his family was essentially thrown out of the castle as soon as the funeral was over, and the new king ordered all photographs and correspondence between and Abdul and Victoria seized and burned.

Essentially, his legacy was swept clean from the history books.

It’s another powerhouse performance from Judi Dench as Victoria. It’s certainly a warts-and-all portrayal of the queen, showing her as an old, addled and bored woman who wears her royal mantle as a burden rather than a responsibility. Her entire life is an unceasing litany of dinners, presentations, signing of documents, etc. The crown is her cage.

There’s one terrific scene where Victoria recites all her own faults with stark honesty, showing a sharp mind and strong soul underneath the layers of time and the trappings of office. The longest-reigning English monarch (until the current one), Victoria is depicted as someone who has loss the zest for life, and regains it in her friendship with Abdul.

Played by Ali Fazal, Abdul is shown as a young, idealistic man plucked from obscurity and picked by fate for his role. A low-level clerk in a jail near Agra, he is selected to present a ceremonial coin to the empress simply because he is 1) tall, and 2) chose some carpets a functionary liked.  Fazal plays him as earnest, good-hearted and rather naïve.

He and another man, Mohammed, spend two months traveling by ship to England for a ceremony that lasts 30 seconds. Such was the state of the royal court, where tuxedos are considered daywear and each course of every meal is preceded by a trumpet blast. It’s an amazingly gorgeous film, with period sets and costumes to catch your breath.

Frears, Hall and their cast carefully craft the growing relationship between the pair, with hints of romantic passion that give way to a deeper connection. Shocked upon learning Abdul is married, she orders his wife and mother-in-law brought to live with them at court.

The cast is uniformly excellent, including Tim Pigott-Smith as the head of her majesty’s court; Eddie Izzard as the bombastic heir apparent; Michael Gambon as the befuddled prime minster; Paul Higgins as the pig-headed royal doctor; and Olivia Williams and Fenella Woolgar as the chief ladies-in-waiting.

Posted by Christopher Lloyd at 12:19 PM