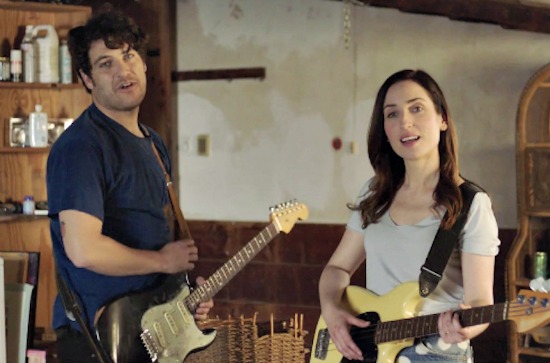 “Band Aid” has a clever hook: a married couple who can’t stop fighting start a band as an outlet for their frustrations and resentment. They’re still screaming at each other, but through the prism of rock ‘n’ roll songs, and it has a strangely positive effect on their relationship.

It’s a delicious and strong filmmaking debut by Zoe Lister-Jones, who wrote, directed, produced and co-stars in the romantic dramedy, which reportedly used an all-female crew. Adam Pally plays the husband, and the movie doesn’t short-shrift the male perspective like so many other films balanced in the opposite direction.

Lister-Jones plays Anna, a former writing prodigy who these days drives for Uber and frets about how all her friends are having babies… and feeling the pressure to do the same. Pally is Ben, a freelance graphic designer (when he cares to work, which isn’t often). He seems to spend most of his days playing video games and not cleaning the house.

Part of them wants to have kids, part of them resents being forced into that role, and they direct their negative feelings over that conflict into each other. Already amateur musicians who cut up at birthday parties and such, they dust off their old instruments and start to pound away in the garage. Fred Armisen plays their creepy neighbor, a recovering sex addict who gets recruited as the drummer.

The songs (written by Lucius) are catchy and fun, and the movie boasts plenty of hilarity peppered with some deeper scenes that reveal the extent of the main characters’ anger. At the core of their struggle is what they don’t want to face: the feeling they’re thirtysomethings who failed to launch.

Smart and insightful, “Band Aid” looks at married life from an authentic vantage point, where all is not bliss and the power chords are sometimes painful to hear.

Bonus features are OK. They include seven deleted scenes, outtakes and a music video that’s part song and part comedy.