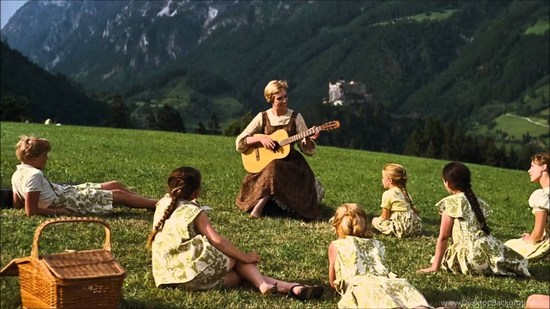 Maybe it's because I'm getting older, but I find myself having more patience for movies I didn't care for when I was younger.

I've tried on a couple of occasions before to watch "The Sound of Music," and ended up turning it off after just a few minutes. Too cornball, too "old people movie," that fastidiously unironic tone. It seemed hard to reconcile this movie residing during the tumult of the Civil Rights movement, Vietnam war protests, surge of harder music and bolder films, and other massive cultural shifts of the '60s. It seems more a product of the 1930s-1950s.

It's a stubbornly un-hip movie from an era when "cool" became the indispensable cultural attribute.

So I decided to give it another go, if for no other reason than an effort I started a couple of years ago to watch all the remaining Best Picture winners I hadn't seen before. With Oscar season upon us again as I write this, seeing this movie was given a bit of imperative in what has admittedly been a somewhat lackadaisical project.

I still felt that tug of listlessness during the early scenes -- Julie Andrews' iconic twirling on a mountaintop while warbling "The Hills Are Alive," dour nuns who suddenly start singing with tremulous old-lady timbres. But I held on to the point Andrews' earnest nun-to-be, Maria, joins the von Trapp family at their sprawling mansion in Salzburg, and the movie suddenly took off for me, like a bloated beast that sprouts wings and takes to the air with graceful majesty.

Despite its nearly three-hour run time, "The Sound of Music" has very little fat in it. Even the song and dance scenes move along at a brisk pace and never loiter -- unlike another musical Best Picture winner I could name.

I was also struck by how memorable nearly every song in the film is. An adaption of the 1959 stage musical by Rodgers & Hammerstein, it includes tunes like "Climb Ev'ry Mountain," "Maria," "Sixteen Going on Seventeen," "My Favorite Things," "Do-Re-Mi," "The Lonely Goatherd," "So Long, Farewell," "Edelweiss," "Something Good" and "I Have Confidence." Even though I hadn't seen the movie as a child, I grew up hearing and singing these songs.

There's not much to the storyline. Maria is the rebellious sister at the convent, not of out meanspiritedness but an uncrushable desire to laugh, sing and enjoy life. She's sent to be the nanny to the seven von Trapp children as a way to test her faith. She soon takes the children under a maternal wing, and falls in love with their father, the imperious Captain Georg von Trapp, a retired naval commander and widower who is betrothed to a gold-digging baroness (Eleanor Parker).

Things work out and Maria ends up marrying Georg, but not until right after Austria has agreed to be annexed by Nazi Germany. Pressed into service due to his military experience, Georg sneaks his family over the border to Italy.

It's based on a real family, who eventually made their way to America and gained fame as the Trapp Family Singers. Which was ironic, as Georg refused to let his children sing outside the home, considering it common behavior to perform in public. (Though Austria officially banished the nobility in 1919, many like he still carried their unofficial titles and used "von" before their surnames.)

Quite a lot of historical details were changed for the stage production and movie, the most notable being that Maria and Georg married in the 1920s, not during the rise of Nazism. The family lost most of its wealth during the worldwide depression of the 1930s, and did not live nearly so luxuriously as depicted in the movie, with a gated mansion and servants.

And, if the accounts of the surviving children are accurate, Maria was hardly the angelic mother figure depicted by Andrews, being prone to sudden fits of range and melancholy.

Ultimately, it's the performances of Andrews and Christopher Plummer as Georg that propel the movie forward. I was struck by the fact they are actually close in age -- Andrews was 28 and Plummer was 34 when they began shooting the film. Within the context of the story, Maria would be an ingenue while Georg was a middle-aged father of teenagers -- old enough to have retired from a naval career. (The real Georg was close to 50 when they met.)

Andrews had already played in 1964's "Mary Poppins" when director/producer Robert Wise and screenwriter Ernest Lehman were able to view footage of her prior to that film's release. They immediately locked her into a contract because they knew she would become a major star.

Plummer was harder to get, a theater star who repeatedly refused the role because he thought the father character was underdeveloped. They eventually got their man, and Plummer's film career is still spinning along nicely more than 50 years later. Plummer's singing voice was dubbed by Bill Lee, a legendary "playback singer" who achieves a very naturalistic match with Plummer's speaking voice.

Richard Haydn plays "Uncle" Max, a conniving music promoter who apparently spends his day scouring the Austrian countryside for regional singing groups, and scrounging off the beneficence of wealthy hosts. He's partnering with the baroness to fleece Georg via marriage, with even the barest of suggestions the two of them are romantically involved. Still, he's portrayed in a positive light as the charming rapscallion.

Likewise, the baroness, who lies about the state of her own wealth to entice Georg, is redeemed by being the one to recognize his feelings for Maria, and initiating the breakup of their engagement herself.

Ben Wright plays Herr Zeller, the only true villain of the piece, a local official of some sort who leads the Nazification effort. Daniel Truhitte is Rolfe, the telegram delivery boy-cum-Hitler Youth recruit, who dallies with the eldest von Trapp daughter for a time.

The kids are played by, from eldest to youngest, Charmian Carr as Liesl, Nicholas Hammond as Friedrich, Heather Menzies as Louisa, Duane Chase as Kurt, Angela Cartwright as Brigitta, Debbie Turner as Marta and Kym Karath as Gretl.

(Carr was 26 when she played 16-year-old Liesel, showing that the Hollywood trend of having much older actors masquerade as teens is hardly a new phenomenon.)

Shot in beautiful, bold colors by Ted D. McCord (who lost the cinematography Oscar to Freddie Young for "Dr. Zhivago"), "The Sound of Music" has been well-preserved with a number of high-quality video additions and theater re-releases as recently as 2000. More than 50,000 people a year still take the official bus tour visiting the various filming locations around Salzburg.

What struck me most was how emotionally involving the characters and stories are. All the children have distinct personalities despite not getting a lot of individual screen time aside from Liesel. Georg's familial reawakening, in which he joins his children in song after a long period of mourning his late wife, is a real heart-grabber.

Sometimes movies just need time to mature before they're fully appreciated; the same goes for movie critics to appreciate them.