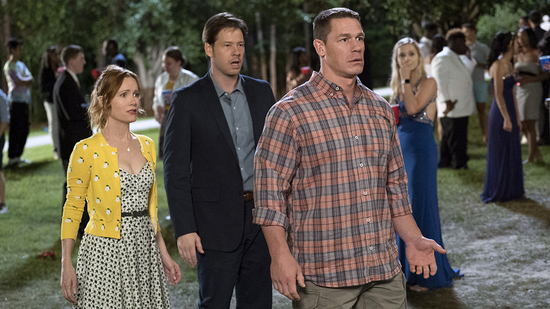 The arithmetic behind "Blockers" is not hard to add up: Take your prototypical teen sex comedy premise of three horndogs looking to lose their virginity on the night of the prom/homecoming/big party, flip their genders to girls, have their parents stumble upon the #SexPact2018, freak out and spend the night following them around to prevent said flowers from being plucked.

Layer in a little PC speech about female empowerment for show, stir in a gross-out scene or three, and you've got a movie.

It's not a bad flick, but I counted maybe four solid laughs in the movie, and a whole lot of chatter in between. In comedy, like a lot of life, many people confuse activity with achievement.

The focus is clearly on the parents, played by comedienne Leslie Mann, comedic actor Ike Barinholtz and John Cena, the WWE star who's trying to join the string of musclebound ersatz athletes -- Schwarzenegger, Stallone, Johnson -- trying to pump himself into a funnyman.

I'll be generous: he's getting there. He's building some decent timing and repertoire of deadpan reactions. Cena seems obliged to show his ass in every movie he's in these days -- in the flesh, I mean, not "Ferdinand" -- and the camera crew labors to shoot him at the proper angle to obscure his bald spot. I give him one more movie before he joins Channing Tatum in full-on Toupee Acting.

He plays Mitchell, a dweeby coach obsessed with success. His kid is Kayla (Geraldine Viswanathan), who's easily the best of the three actors playing teenagers. She plays drunk well and gets several good one-liners.

Mann is Lisa, a hectored single mom who has some skeletons in her closet, and wants to ensure that her daughter, Julie (Kathryn Newton), doesn't start a graveyard in her own.

Last is Barinholtz as Hunter, the screwup of the trio. He's largely been an absentee father, and is now looking to reconnect with Sam (Gideon Adlon), who's a little bit more reserved than the other kids and a mite Goth. She's got a secret she's been harboring, and it's to Hunter's credit that he notices what's up with his kid long before anyone else does.

I wish the movie had spent more time with the teens and developed them a bit better. As it is they're just reflections of their parents, played by recognizable adult actors.

Julie has a longstanding boyfriend, Austin (Graham Phillips), so her hookup is more logical, while the other two girls more or less pick some dude at random to take to the prom. Indeed, Kayla literally peers around the lunchroom the day of the prom and points out the class druggie, Connor (Miles Robbins), as her mark.

Sam is going with Chad (Jimmy Bellinger), the sort of clueless schlemiel who thinks that wearing a short-brimmed fedora can somehow subtract an ass-ton of awkwardness. But he's just a tool, and Sam has her eye on someone else.

It's interesting that the boys are pretty much disposable accessories to the girls' mission. I guess that's fair, since that's how the young women are treated in most male-centric sex comedies.

I liked "Blockers" in pieces. Parts of it come at you with staggering predictability -- as soon a stretch limo shows up as conveyance, you just know the interior is going to get a very organic redecoration. And Mitchell is a such a tightass that we are certain some bizarre scenario is going to come along that forces him to unpucker.

(I assumed the particular type of imbibing depicted was a concoction for the movie, but I Googled it, and nope: it's really a thing. But in a world of condom snorting, I guess I shouldn't be surprised.)

Director Kay Cannon is the creative force behind the very successful "Pitch Perfect" franchise, and steps behind the camera for the first time, while screenwriting bros Brian and Jim Kehoe provide the very formulaic story.

The truth is that losing your virginity is very stressful for most people, and the actual sex itself is almost always subpar. Using the old saying about pizza and sex as a ruler, this is better than gas station slices, but tops out at around Little Caesars.