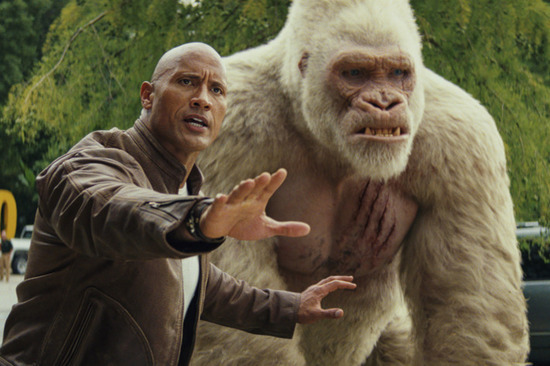 Just a short review today; Manuel Fernandez is handling the main review at The Film Yap, so  head over there to check it out.

"Rampage" is the best based-on-a-video-game movie I've ever seen. Granted, that's not saying much.

The roll call of these flicks ranges from the merely boring to the tragically awful. These movies tend to be big, loud and dumb. "Rampage" is too, but there's enough genuine fun in between the silliness to recommend it.

Dwayne "Not The Rock; OK, You Can Call Me The Rock" Johnson has his shtick down pretty well these days. I describe it as Flex and Smirk, Smirk and Flex, Flex and SCOWL... and Flex.

His characters (Davis Okoye) may have some other job description -- he's a primatologist here -- but he's always the biggest, baddest dude around. Woefully inadequate T-shirts fail to contain all his muscley muscleness. He is accomplished at hand-to-hand combat, firing big guns and piloting helicopters, because isn't that a skillset everyone at the San Diego zoo has?

If you don't remember the 1986 arcade game, it allowed players to control one of three giant monsters -- an ape, George; a wolf, Ralph; or a lizard, Lizzie -- destroying the city. You got to smash buildings, punch fire engines to smithereens and eat distressed damsels. It was great fun.

"Rampage" gets us to this scenario by way of some convoluted mix of corporate greed and scientific mumbo-jump. A nasty company named EnerGyne was conducting illegal experiments in space, one got loose and exploded the place, but not before three samples of the genetic editing MacGuffin landed on Earth, turning normal creatures into gigantic, aggressive smash machines.

One of them was George, an albino gorilla at Davis' zoo with whom he has a special relationship. They communicate with each other via sign language, and even joke around and flip each other the bird. The CGI for George and the other critters is quite good, especially the expressions on George's face. Ralph has spikes and a few other tricks, while Lizzie seems to be part alligator, part boar.

Naomie Harris plays Kate Caldwell, the do-gooder scientist who's helping Davis save the day; Malin Akerman and Jake Lacy are the sneering sibling villains; Jeffrey Dean Morgan does his Negan thing in the guise of a Southern-fried FBI agent who apparently has the wherewithal to go anywhere, summon any resources, give lip to anybody he wants.

Once George gets infected and starts growing at a geometric rate, Davis tries to keep the authorities from going all bang-bang on him. But it doesn't work, and soon he's tracking the path of destruction Chicago, which is about to get a big bag of hurt.

"Rampage" isn't a great movie by any stretch, but it's a decent popcorn flick to kick off the summer movie season.

Posted by Christopher Lloyd at 11:25 AM