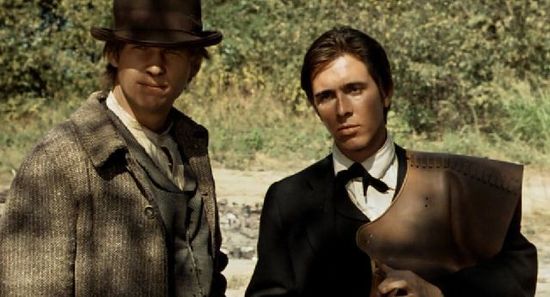 A teaser I used to like to spring on people was this: "Do you know who is very quietly having himself one of the all-time great film acting careers?"

Prior to 2009, when he finally won an Academy Award after five tries, I don't think many people would have answered "Jeff Bridges." But I think it's true -- and evidently more now agree with me, helped by two more Oscar nominations since.

Think of a time over the last five decades when Jeff Bridges wasn't making great movies. You can't. From "The Last Picture Show" up until "Hell or High Water" a little more than a year back, he's always inhabiting roles with an unpracticed authenticity, from giant blockbusters to little indies, playing everything from presidents to aliens to cowpokes.

Each time, we never question him for an instant. We never think, "Here's the big movie star, doing his thing." (Unlike, say, Harrison Ford, who's roughly his contemporary.) Maybe it's because he's never been much of a public celebrity -- married to the same woman for 40-plus years -- or politically outspoken, but Bridges has that ability to instantly disappear right in front of us. I think part of the reason he didn't get the credit he deserved was because he made it look so easy.

Fresh off an Oscar nomination for "Picture Show," Bridges co-starred in "Bad Company," a Western directed by Robert Benton ("Kramer vs. Kramer"), in his first foray behind the camera, from a script he co-wrote with David Newman. The two had also collaborated on the screenplay for "Bonnie and Clyde," and with this film Benton launched an important directing career spanning four decades, including the underrated "The Human Stain" from 2003. In all, Benton has notched six Oscar nominations with three wins.

Bridges was about 22 when they shot the film, playing maybe 17 or 18 as the leader of a distaff gang of boys fleeing conscription in the Union army to seek their fortunes in the West.

I admit I'd never heard the term "acid Western," which more or less got started with "El Topo" in 1970, and was loosely applied to a number of films in the ensuing years, including "Bad Company." The movie is certainly not surreal or bizarre like Jodorowsky's. In a lot of ways, it's very old-fashioned, with its washed-out colors -- almost sepia-toned -- familiar Western archetypes and tinny piano musical score (by Harvey Schmidt).

Perhaps it got thrown in with the acid crowd because of its youthful cast, which was taken to mean Benton and Newman were espousing a counter-cultural stance. It's a tale of how very young boys were chewed up and spit out by a burgeoning young nation's expansion. For me, it's notable that they set out not out of a sense of adventure, but fleeing from serving in the Civil War. Of course, they end up finding as big a bellyful of violence, malevolence and despair as they would've on the front lines.

Robert Ebert, in his contemporaneous review, noted correctly that the story is essentially a series of self-contained episodes. Drew Dixon (Barry Brown), an upright Christian lad from Ohio, is sent packing by his parents after the bluejacket recruiters come calling at every household, dragging out boys outfitted in dresses to fool the draft. The Dixons already sacrificed their older son to the war, and send the younger one west to seek safety and fortune, with $100 and his sibling's gold watch to guide him.

He soon runs in with Jake Rumsey (Jeff Bridges), a bushwhacker who befriends Drew by warning him about the prevalence of bushwhackers in these parts. After cautioning him that all the stagecoaches west are booked for six months solid, Jake plunks him over the head and steals all the money in his pocket (not knowing that Drew has hidden the bulk of his fortune in his boot).

Coming to, Drew seeks solace at the house of the local preacher, but after the wife leaves to fetch him, who should come calling but Jake, holding the purse one of his gang stole earlier, hoping to return it for a double-dipped reward. The two lads take up a ferocious row, smashing apart the woman's drawing room, before making their peace with Jake offering to take Drew into his gang.

First, Drew has to prove his worth by pulling off a job alone, which he fakes by spinning a story of robbing a local merchant, presenting $12 from his secret stash as evidence.

From there, the story is a gradual descent in fortunes as the boys move marginally westward, encountering bandits, farmers, whores, lawmen and other fates that whittle their numbers until only Drew and Jake remain. Ardent friends who often behave like foes, it's the low-born scallywag trying to make sense of the educated fellow who reads "Jane Eyre" and refuses to steal, and vice-versa.

The supporting cast is a veritable who's who of "that guy" character actors:
The boys' gang is rounded out by Jim Bob (Damon Douglas), a dimwitted blond, and Joshua Hill Lewis as Boog, a pint-sized fountain of foul-mouthed insults. Boog is only about 11 or 12 years, usually the brunt of the other boys' teasing, so his inevitable death -- his head blasted apart by a shotgun for stealing a pie -- marks the film's turning from fun 'n' games to tragic lesson.

The real standout of the supporting cast is David Huddleston as Big Joe, the aging leader of the gang of bandits who waylay Jake's crew, after he has fallen asleep during his turn at watch. Wearing a stovepipe hat, a voluminous fur coat and often chewing a pipe, Big Joe serves as Jake's chief antagonist, and teacher.

There's a great moment where Jake levels his pistol at Big Joe, who doesn't even flinch, talking the boy into complacency, then casually whipping out his own sidearm and blasting Jake's revolver away. "Still got it," he mutters to himself, before tendering this sage counsel:


"My boy, let me give you a little piece of advice. If you're going to pull a gun on somebody, which happens from time to time in these parts, you better fire it about a half a second after you do it... because most men aren't as patient as I am."

He orders his men to seize every last bit of their wealth -- even their beans and coffee -- but leaves the boys with their guns and horses. Because it's acceptable in this eat-or-be-eaten hellscape to inflict every means of deprivation, but you don't leave another man immobile and defenseless.

In a normal Western the paths of Big Joe, Drew and Jake would cross again with a violent extravaganza. This does happen, but the older man sits the fight out, reassured by his lieutenant that the rest of the men can handle two boys. Jake and Drew manage to get the drop and blast apart Big Joe's entire gang, but he doesn't bother with revenge -- simply gathering up another gang to keep marauding.

After Drew and Jake have inevitably come to cross purposes, after the latter finally discovers Drew's secret stash of cash and thunks him unconscious a second time, it comes as little surprise to us to discover that Jake throws in with Big Joe. Perhaps the hot-headed lad, who loves to boss others around, has finally figured out he has a thing or two to learn.

"Bad Company" is a good, not a great film. The central dynamic between Jake and Drew never fully clicks, though each actor acquits himself well. Bridges is charismatic and slightly skeevy, while Brown comes across has hopelessly blinkered -- a do-gooder who tries to convince himself he's not careening down the slipper slope.

Sad coda to his career: Brown made a few more films, with never such another high-profile role (unless you count his billing as "trooper" in "Piranha") and a little TV, before taking his own life in 1978 at age 27.

Though the film isn't well remembered these days, it does showcase one of the most important actors of the last century, stepping from boyhood roles into grown-up ones, and from the edge of the stage to the center.