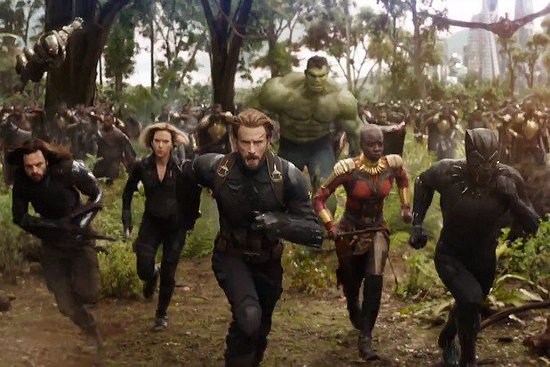 We’re 20 years and more than 50 movies into the renaissance of cinematic superheroes, when you count the various iterations of Marvel Comics and the handful of DC. It’s usually a time when middle age sets in, a sort of creative malaise where stars age out of their roles, studios grow covetous of their cash cows and the storytelling inevitably suffers.

Caution, and reliance on tried-and-true formula, becomes the name of the game.

Then here comes “Avengers: Infinity War” to blow everything up in ways we completely didn’t expect or, indeed, would have said could never happen if foretold to us. Watching it, I kept saying to myself, “Well, there’s no way they’re going to go there,” and then they went there, and then they want past there.

This is a dazzling, ambitious, overpowering film experience that gives bracing new life -- and some deaths -- to the superhero genre. This feels like a watershed moment, a paradigm shift. Wherever this type of filmmaking goes, from now on we’ll think of superhero movies in terms of “before” and “after” this film.

Here’s the unpleasantness: the earth-shaking nature of this movie makes it very, very difficult to review. If I were to even hint at half the stuff that happens in this movie, your mind would be blown. I will endeavor to do my best in the rest of this review not to commit any spoilers. I advise you to avoid conversations or social media posts from anyone you don’t trust in that regard.

Things pick up a couple years after the events of “Captain America: Civil War,” with the group cloven by internal strife and government interference. Thanos, the world-conquering villain who’s been alluded to in previous Marvel Cinematic Universe films, finally makes his big push on Earth -- and a number of other planets -- to gather the six Infinity Stones that will give him virtually unconquerable power.

Josh Brolin plays Thanos, in an oddly emotive motion-capture CGI performance. He truly believes himself to be the universe’s savior, making the hard choices no one else is willing to. A vaguely purpleish titan with a craggy face and muscles big enough to beat the Hulk (Mark Ruffalo) senseless, Thanos pursues ultimate power, and is willing to pay the ultimate price to obtain it.

Directed by Anthony and Joe Russo, who helmed the last two Captain America movies, from a script by Christopher Markus and Stephen McFeely, “Avengers: Infinity War” is an action-packed maelstrom that somehow manages to fit in enough little moments for the actors to let their characters’ essential nature shine through.

I often complain that movies these days ramble on too long, but at 2½ hours, this film flew by. Again, I really don’t want to give anything away, but when the credits started to roll, I truly couldn’t believe the film was going to end the way it does. I was left shocked, amazed, exhausted and spectacularly entertained.

Posted by Christopher Lloyd at 11:00 AM