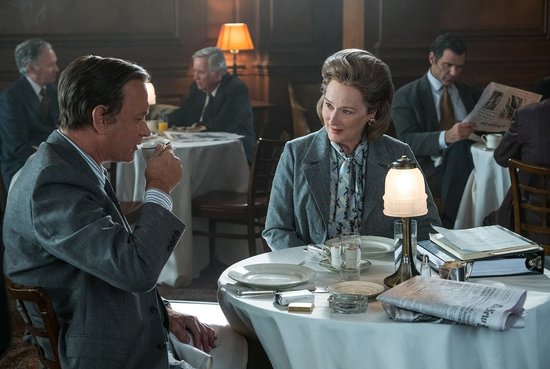 In a time when journalism in general and newspapers in particular are under so much attack -- both from economic tidal forces within the industry and political assaults from the White House --- here is a good old-fashioned drama very much in the vein of “All the President’s Men” that extols those who risk much for the simple reward of telling the truth.

“The Post” is Steven Spielberg’s ode to an era when journalists and newspapers risked all to inform the public, and also a summoning of that same spirit in a time when it’s needed more than ever.

“This is who we were,” the film practically chants, and exhorts. “This is what we can be again.”

Meryl Streep and Tom Hanks play Katharine Graham and Ben Bradlee, the owner/publisher and editor of The Washington Post, respectively. In 1972 their rival, the New York Times, first published excerpts of the Pentagon Papers, a damning recitation of the nation’s failures in Vietnam, before a court injunction slammed down on them.

The Post team -- which also includes Bob Odenkirk, Carrie Coon and David Cross -- got hold of the papers and had a choice to make: publish, and face the quite literal possibility of putting the Post out of business, or press on. We all know the choice they made, but “The Post” is the story of what went on behind that agonizing decision.

Hanks is great -- he always is -- but Streep is the pivotal figure in the story. We learn about her own insecurities, a rich debutante inheriting the Post from her late husband; about what it takes to be a female leader in a time when women were routinely not listened to; and about the financial crisis that coincided with the decision, in which Graham took the company public on the stock exchange.

Part legal procedural, part historical drama, but most of all a portrait of the power -- and risks -- of journalism, “The Post” is director Steven Spielberg’s best film since “Lincoln.”

Bonus features are quite good. In a clever twist, they’re divided into sections like a newspaper would be. The DVD has:
Upgrade to the Blu-ray edition, and you add: