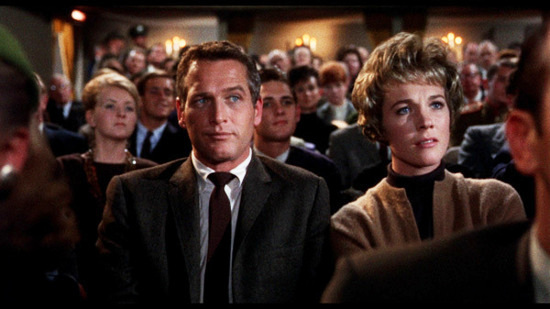 I've been making an effort the last couple of years to catch up on Alfred Hitchcock's earlier films before he came to Hollywood and experienced his heyday in the 1940s through early 1960s. But the truth is I haven't seen any of his later movies.

I'm not a big fan of "The Birds" and consider "Marnie" to be an utter embarrassment. So I have sort of unconsciously lumped all his post-"Psycho" filmography into a mental bin I dismissed as unworthy.

"Torn Curtain" isn't going to be confused with Hitch's best stuff, but I was surprised at how effective and tense it was. His 50th feature, it was fairly savaged by critics of the time, who said Hitch's style was worn out, though it did decent box office.

The mercurial, mischievous director was eager to do another spy film because of the popularity of the James Bond flicks, and he even received the biggest movie star in the world at the time, Julie Andrews, to play in it.

Truth was Hitchcock didn't want Julie Andrews or her co-star Paul Newman, preferring Eva Marie Saint and Cary Grant, who paired nicely in "North by Northwest." But Grant was retired and Saint deemed not a big enough star anymore. Despite the director's reserve, Newman and Andrews make an excellent onscreen couple, playing an American nuclear scientist defecting to East Berlin and his asssistant-slash-fiance.

The movie opens with the two rollicking in bed together, missing breakfast and then lunch in favor of some extended lovemaking. The very fact that a mainstream movie showed an unmarried woman and man in bed together tells you something about how much cinematic mores had changed by 1966.

The movie has two distinct halves. In the first, Michael Armstrong (Newman) defects to the Soviet bloc with his lady love, Sarah Sherman (Andrews), tagging along uninvited. He attempted to give her the slip at a Copenhagen science conference, but she followed him on the plane and is horrified to discover that he is going behind the Iron Curtain. Their relationship is strained and in danger of shattering.

In the second, he reveals to her what we suspected all along: he's not actually a traitor betraying America's nuclear secrets to the enemy, but doing quite the opposite: trying to pick the brain of a legendary German scientist, Gustav Lindt (Ludwig Donath), for the last piece of the puzzle to building a missile defense system that would give the U.S. the advantage in the nuclear Cold War.

Their relationship blooms again, just in time to spend the last hour of the movie being chased around by the Stasi security forces. From their kiss-kiss in a park, it's all chase-chase to the end, with a little bang-bang thrown in.

Hitchcock's camera work (photography by John F. Warren) is notable for its extreme close-ups of its stars, especially when their faces are close for kissing or conversation. It's distracting at first, seeing a star from eyebrows to chin, but the smothering effect also draws us into their passion.

He also uses the same technique for what is probably the film's most famous scene: in which Armstrong and a German farmer's wife (who's secretly part of the resistance) beat, stab and wrestle his "security guide," aka shadow, to death, finally doing him in by forcing his head into an unlit gas oven.

It's an astonishing sequence of grunts, sweat and blood, the flip side -- and more overt depiction -- of Michael and Sarah's canoodling.

The thug is Gromek (Wolfgang Kieling), a leering presence in a black leather jacket who prattles annoyingly about his days living in New York City, no doubt as a Soviet-sponsored spy. In a classic bit of Hitchcockian misdirection, Gromek perpetually struggles with a lighter that won't produce a flame. I figured this would prelude some fireball-related demise, though in the end it's the lack of a spark that ends him.

The movie (screenplay by Brian Moore from a story by Willis Hall and Keith Waterhouse) contains a rogues' gallery of interesting, colorful characters. Günter Strack plays Manfred, the well-coiffed East German scientist who recruited Michael and clearly has romantic designs on Sarah. Mort Mills is the spy chief helping them out, posing first as a farmer and then a travel agent.

David Opatoshu is Jacobi, who oversees an operation in which the underground runs a fake bus route from Leipzig to Berlin, complete with fake passengers. It runs 10 minutes ahead of the real bus, and during the trip through the countryside they're repeatedly delayed, to the point the real bus is in danger of catching up and revealing their ruse.

Leave it to Hitch to make a bus ride a nail-biter.

Tamara Toumanova has a fun role as a famous aging ballerina who is repeatedly (and inadvertently) dissed by the spy contretemps. She is first miffed when she gets off her plane and sees a horde of photographers waiting, puffs herself up for a picture, only to learn they are there for Michael's defection, which the East Germans are playing up for propaganda.

Later when Michael and Sarah are on the run, they hide in the theater where she is performing. She spots him from the stage, recognizing him from his photo being splashed in every newspaper, and calls the authorities, leading to another terrifically tense scene as the couple try to think of an escape with police closing in from every side during the performance. The haughty artiste gets her own comeuppance in the end.

By far the weirdest and most indelible supporting charactger is Countess Kuchinska, a displaced Polish noblewoman played by Lila Kedrova. Ostentatiously dressed, she is desperate to emigrate to the U.S. Spotting Michael on the street, she politely blackmails them in return for her help, which they didn't actually need.

She bemoans the terrible coffee and cigarettes of the Eastern bloc, and pleads with them to be her official sponsors to emigrate in exchange for showing them to the post office where they will meet their next contact (a location they had already discovered on their own). It never seems to occur to her that two American spies would not be looked upon favorably on her visa application.

A pathetic, cloying figure, Kuchinska makes a scene wherever she goes, hurts their cause more than she helps, though in the end she proves a figure of stouter resolve than anyone imagined.

"Torn Curtain" is also notable for another, sad reason: it marked the end of the long and fruitful partnership between Hitchcock and composer Bernard Hermann. Hitch rejected Hermann's creepy, languid score and, after the latter refused to change his, ordered up a jumpier one by John Addison, dooming the relationship. I have a copy of Hermann's rejected score, and I can't imagine why Hitchcock disliked its eerie beauty.

Reportedly the studio wanted something jazzier and more modern. During their fallout, Hermann reportedly told off the director: "Look, Hitch, you can't outjump your own shadow. And you don't make pop pictures. What do you want with me? I don't write pop music."

Hitchcock, whose career was (imho) damaged by being put upon a pedestal by the French critics, who hailed him as an auteur, spent much of his last two decades worrying about being seen as old and out-of-touch. Instead of following his inner voice, he fretted about his films being derided, leading inevitably to what he feared most coming to pass.

At least, that's my working theory. I quite enjoyed "Turn Curtain" as a well-crafted bit of old school suspense. Maybe I'll need to go deeper into Hitch's last days to see if I'm right.