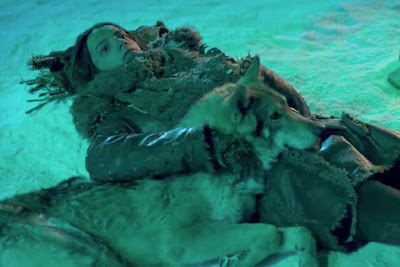 One of my greatest pleasures as a critic is pointing people to wonderful films they may have missed. It’s cool to review the latest blockbuster, but nothing beats helping others find movies they might not have otherwise.

“Alpha” is a rousing prehistoric adventure tale that presumes to depict the first cooperation between humans and canines. It’s a gorgeous film with great production values, convincingly portraying Europe circa 20,000 years ago.

Kodi Smith-McPhee plays Keda, a youngster on the verge of manhood. He’s been picked by his father, the chief of their tribe, to participate in a buffalo hunt for the first time. It’s the unofficial rite of manhood, since it involves a long, arduous journey and a dangerous encounter that will determine whether they have enough food and furs to survive the coming winter.

When Keda is injured and separated from his people, he must find his way back on his own. After fighting off a pack of wolves, he nurses the one he stabbed with his knife back to health. He names the animal Alpha, and after some initial antagonism, together they begin the long trip home.

Director Albert Hughes and screenwriter Daniele Sebastian Wiedenhaupt craft a story that is part spectacle, part coming-of-age tale. The humans speak in an ancient language with subtitles for our benefit. The movie almost doesn’t need them, because you can usually discern Keda’s thoughts without his speech. He communicates with Alpha through hand motions, whistles and eye contact.

It might be too intense for younger children, but “Alpha” is a great adventure story for the whole family.

Bonus features are quite good. The DVD has two making-of short documentary features: “The Wolf Behind Alpha” and “Boy & Wolf.” Upgrade to the Blu-ray edition and you add two more: “Building the World” and “A Hero’s Journey.”

The Blu-ray also boasts a new director’s cut of the theatrical film, plus three deleted scenes with commentary by Hughes and an alternate opening and ending with commentary.