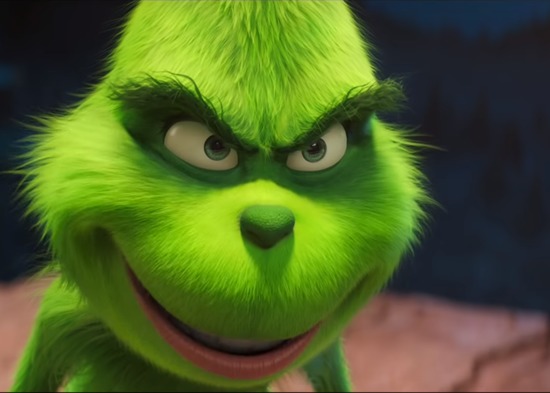 “The Grinch” is bright, joyful, goofy and largely misguided.

Personally I always liked the darker undertones of Dr. Seuss’ tales. The Grinch is literally green with envy, a nasty old crank who looks down on the perpetually happy denizens of Whoville, while obviously wishing he could join in their caroling and merry-making.

He has to find his bottom before he can grow -- three sizes, heart-wise.

This new animated version jettisons much of the nastiness of the book, 1966 television special and 2000 live-action version starring Jim Carrey. He’s sad rather than loathsome, more worthy of pity than scorn. I certainly can’t imagine someone writing a whole song about how mean he is.

Dratted, he’s even nice to his dog, Max. He still makes him pull the sleigh, but it’s not all that hard and he gives lots of praises. “You’re the best dog a Grinch could hope for,” he practically purrs.

There are lots of changes from the original story. (Scott Mosier and Yarrow Cheney directed by a screenplay adaptation by Michael LeSieur and Tommy Swerdlow.) Instead of being an outcast, Grinch is a member of the community who occasionally drops into town to buy groceries. A flashback places him at the Whoville orphanage as a lad, and it’s possible he’s actually a Who himself. I noticed they all have furry faces, though not so hirsute as the Grinch’s bounteous neon body hair.

Though, in one of the better throwaway jokes, it’s suggested that Grinchy is going gray and the green is a dye job.

Grinch is voiced by Benedict Cumberbatch, who’s proven himself to be a true vocal chameleon who can do both this and the dragon Smaug from the “Hobbit” movies. He lives in his vast mountain cave lair, getting about mostly by automatic chair. In his iteration he’s essentially a brilliant inventor throwing together contraptions to serve his whims.

Cindy Lou Who (Cameron Seely), the adorable little girl who helps teach Grinch the spirit of Christmas, even gets a backstory as the daughter of a harried single mom (Rashida Jones). She hatches a scheme to capture Santa on Christmas Eve so she can ask him to help her mother out, recruiting her friends to rig cookie traps. I don’t think Cindy Lou thought this out very well.

There’s lots of boingy action and kiddie-friendly humor thrown in to pump up the entertainment quotient. For instance, there’s a mountain goat that just randomly screams instead of braying. And an apprentice reindeer, Fred, who’s immensely fat but willing.

“The Grinch” is one of those movies that comes along, entertains children and is soon forgotten by adults.