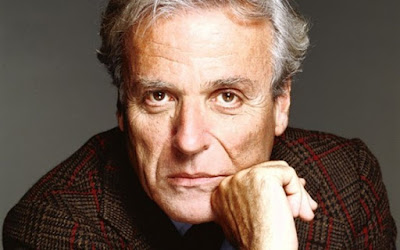 William Goldman so mastered Hollywood's byzantine rules that he not only became known as its greatest screenwriter, he also saw through its charades and shenanigans -- and wasn't afraid to write that, too.

When his "Adventures in the Screen Trade" was published in  1983, he was riding as high as anyone could: winner of two Oscars (for "Butch Cassidy and the Sundance Kid" and "All the President's Men"), highly-paid and sought after both for his own screenplays and as a script doctor for others', someone whose name alone could help get a project green-lit.

But he wrote honestly and acidly about the business of Hollywood in the book, including his own travails and butting of heads with giants like Robert Redford. Perhaps not coincidentally for a place known for the phrase "you'll never eat lunch in this town again," the next few years were a downtime for him. Even "The Princess Bride," based on his beloved own novel, was a middling hit in 1987. But he hit a second stride that lasted through the 1990s and into the early 2000s.

He and my father, Jim, were fast friends at Oberlin College and kept in touch over the years. When I was growing up my dad would make occasional references to knowing somebody in showbiz, which I largely ignored until I was a teenager and knew I wanted to write about movies. He would always call him "Bill," as in mentioning to my mother, "Just got off the phone with Bill Goldman." And so I will, too.

I first met Bill in 1990 when I transferred to New York University to join the Cinema Studies department -- not the much larger and more heralded Film department; we watched movies rather than make them for an education. By then he was divorced and his daughters grown, so he was living alone in an expansive apartment in a Manhattan hotel.

I remember it was raining a deluge that day; my parents and I all got soaked to the skin. So we decided to eat lunch in, wearing some of Bill's old sweatshirts. I got to hoist his Oscars, which he kept lackadaisically on an old bookshelf. Many people have commented how they're much heavier than they appear, which I found to be true.

My dad was a little nervous about leaving his only son alone in the big, mean city. He gave me the phone numbers of two friends in New York City I was supposed to call upon if I had any trouble, and one was Bill's. I kept it for many years without ever using it.

That first day we spent some hours talking movies -- I'm afraid to say I probably came across as a little snotty. My tastes still ran to visual spectacles in those days, before I'd learned that I needed to learn more. Bill was polite to his friend's son, declining to tell me what an ass I was. The only hint was the inscription he wrote in my copy of "Adventures," which reads: "To Chris Lloyd, You knew all this anyway, God Bless, Bill."

Luckily, we did not leave it there. 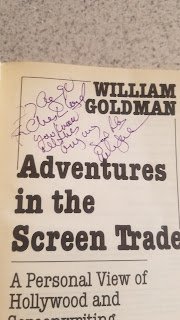 When email dawned, I reached out to Bill and was pleased to get a response. For many years we kept up a correspondence, generally about movies but also sharing personal news and thoughts. He was one of the first people I let know when my dad died six years ago; I still remember his warm remembrance fondly.

Bill was just as direct via email as he was in person or in his writings. If Bill thought the favorite to win the Best Picture Oscar that year was piece of shit, that's exactly what he would write. We occasionally argued, but in a good-natured way.

Interesting aside: in email, Bill mostly eschewed things like capitalization and punctuation. Sentences tended to be very short or run on. Perhaps someone so used to writing in the careful formatting of screenplays craved having a sphere where he could throw out all rules.

But he always signed them the same way: "God bless, Bill."

I knew he was ill in recent years, and the death of his daughter three years ago marked about the last time we spoke. I'm glad to see the various news services giving his passing  glowing coverage. His last produced screenplay was "Dreamcatcher" in 2003, based upon Stephen King's book, and it was a commercial flop. I remember some of the reviews at the time were quite vicious in mentioning Goldman's name.

Bill Goldman was a great writer who was also open about how painful the process of writing was for him. He talked of "going into my pit" upon embarking on a new project. He often felt cut off and alienated from others. The reputation of a curmudgeon eventually formed around his persona, especially as he got older.

But as everyone else spends this time talking about his achievements as a writer, I just wanted to pay my own meager tribute to the man. His most famous saying was "Nobody knows anything," but I'm one of many who can say that this was a man who knew a lot.

Posted by Christopher Lloyd at 1:54 PM