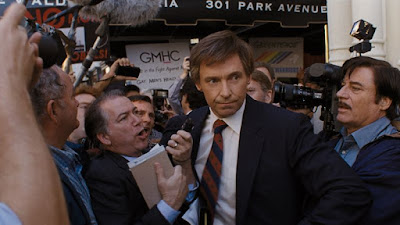 “The Front Runner” is an unflattering portrait of American politics, but even more so of the media.

Based on a book by political journalist Matt Bai, who also co-wrote this screenplay, it examines the moment when tabloid and mainstream news intersected, merged and never really looked back. This was Gary Hart’s 1987 campaign for the presidency, when the U.S. senator from Colorado was seen as the prohibitive favorite to win the Democratic nomination, only to have it all unwind in less than month when his serial philandering was reported.

For decades, Washington politicians held the journalists who covered them to a gentlemen’s agreement: look the other way when young ladies are seen going in and out of our doors, and we will give the access you need to do your jobs. It was a nearly all-male environment, both in the corridors of power and the newsrooms charged with checking them -- so the Faustian bargain was accepted.

Consider that just two years before Hart’s implosion, Teddy Kennedy was witnessed assaulting a waitress along with his protégé, Chris Dodd. It went unreported for five years, and only then in a chuckling passage in a men’s magazine.

That was the mentality held by Hart, a wonky and charismatic politician played by Hugh Jackman. Hart is a man of big ideas and enthusiasm for the future who was laid low by clinging to the unsavory practices of the past. He is annoyed, then outraged, that his philandering is not swept under the rug as it always has been.

“This is beneath you,” he seethes at a young Washington Post reporter (Mamoudou Athie) who dares bring up rumors of his affairs. “Follow me around, put a tail on me. You'll be very bored.”

This line has entered the lore of politics, but like a lot of legends it’s mostly fiction. Hart did not challenge journalists to follow him and then openly dally with bimbos. Reporters from the Miami Herald, acting on a tip from a friend of one of Hart’s conquests, staked out his D.C. townhouse and witnessed model/pharmaceutical saleswoman Donna Rice (Sara Paxton) going in and out. They only heard about the “follow me” line after the fact.

(It should also be noted that the Herald reporters, played by Steve Zissis and Bill Burr, did not “hide behind bushes” as Hart contended, which also became part of the erroneous mythology.)

Directed by Jason Reitman, who co-wrote the script with Bai and Jay Carson, “The Front Runner” is an ambitious, contemplative movie that asks hard questions without offering easy answers.

Was it unseemly for reporters to lurk around during Hart’s downtime to see who he dallied with? Should they have looked the other way, as had been practice? Was it fair for Hart’s talents and ambition to be the price our nation paid for demanding more of our politicians?

One female journalist gives a poignant speech pointing out that Hart, for all his blessings, was still just another man willing to employ his power to use and dispose of women who cater to his whims. There’s also a nice sequence where one of Hart’s campaign workers (Molly Ephraim) is charged with “handling” Rice as the story explodes, knowing she is about to be fed to the wolves.

The film reminded me a lot of early Robert Altman movies, with large casts of characters moving in and out of the frame as the camera slides past, their conversations overlapping and receding. It lends a sense of documentary-like authenticity.

There’s too many supporting actors to mention, although Vera Farmiga and J. K. Simmons stand out as, respectively, Hart’s wife, Lee, who is willing to overlook his dalliances until they become an embarrassment her, and the campaign manager who has spent years building a political machine only to watch it turn to ash virtually overnight.

Making do with the errors of the past is bad, but sometimes in reaching for something better we degrade ourselves. “The Front Runner” is the cautionary tale of our collective rise and fall.