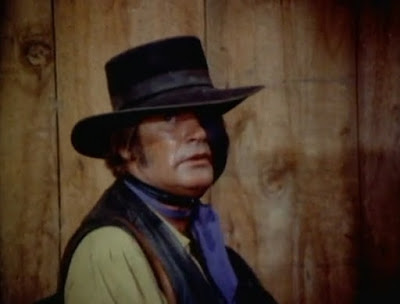 Made-for-television movies, particularly before the modern era, usually had low production values and even lower ambitions. "A Man for Hanging" is certainly guilty of the former but not the latter. It's a surprisingly effective -- and risk-taking -- Western that in a lot of ways plays more like a horror flick.

The main character, eventually named as Avery Porter, is a masked madman who roams the prairies indiscriminately raping and killing for seemingly no purpose other than his own appetites. He wears a black hat and vest, dandyish yellow shirt and bright blue bandana, and a curious custom mask that's like an oversized eye patch, covering the entire left side of his face.

Played by Peter Breck with a signature jackal-like cackle, Porter is essentially a nightmare creature from sprung from the gates of hell. From whence he came, and soon shall he go.

He genuinely hates his prey, and especially women, teasing and taunting them before victimizing them. It seems that a woman once got the drop on him, resulting in his hideously scarred features, as well as his antagonism to everyone of the feminine gender.

Curiously, when Porter's mask is ripped away in the early going, it's revealed that while most of his cheek is mangled -- seemingly more by acid than fire or physical trauma -- his left eye is entirely intact.

It's strange that he would cover it along with his poor flesh, robbing him of three-dimensional vision. (Which is sorta useful in the Old West, what with all the ridin', ropin' and shootin'.) Apparently his appearance is more important to him than having the full measure of his senses.

Directed by Joseph Mazzuca from a script by Joan Gardner, both television veterans, "Hanging" is quite overt in its depiction of violence for its time and venue. I was surprised to actually hear the word "rape" used in reference to his attacks. Theatrical films had even shied away from that term until very, very recently.

The story starts with Porter gleefully shooting his own horse while laughing. He later says it went lame, but we get the sense he purposefully rode it until the poor animal gave out. We later learn he and some fellow bandits have robbed a bank, leaving a wake of bodies behind, and Porter is set to meet up with them to split the loot.

In most Westerns, the money would be the MacGuffin that everyone is chasing after. But here it's barely mentioned. We never even see the cash. It's only brought up when it proves a source of conflict between Porter and his chief henchman near the end.

The tale is set in motion when Porter stumbles upon the Barrenger family farm looking for a new horse. After watching the menfolk depart on a wagon for town, he saunters into the barn and terrorizes Sally (Victoria Thompson), the wife of one of the brothers. She manages to escape when the tussle is interrupted by Ma Barrenger (Lesley Woods), who gets speared on her own pitchfork for her trouble.

Porter makes a beeline for the border, while brothers Shep (Paul Carr) and Tom (David Macklin) form the core of a posse led by Deputy Willie (Steve Raines). Tom is the young hothead who always wants to wade in guns blazing, while Tom is the older and wiser of the two. Both are complete pinheads compared to Willie, who keeps counseling them to caution they never observe.

In one clever bit, they manage to pin Avery down on a rocky outcropping. While the Barrengers argue and tussle about making their move, the masked killer sneaks down the side of the little mountain, steals a horse and all their canteens.

The rest of the story is a slow, dry chase as they stagger across the desert and the posse seems hopelessly outmatched by the wily Porter. A late addition to the proceedings is Liz (Brooke Bundy), a rootin'-tootin' cowgirl wannabe who comes closest to outgunning Porter on his own  terms.

Her sister, blonde bombshell Ellen (Virginia Wood), gets an especially vicious beating from Porter when he visits their homestead/stagecoach landing, and her husband, Fred (Michael Pataki), receives a six-gun to the face for his trouble.

What's interesting about Porter is his total lack of hesitation in killing. At least Han Solo talks before he shoots. Porter will interact with somebody only as long as it takes to get what he needs out of them -- information, in the case of Fred, or forcible sex from Ellen -- and then his guns or fists come out.

He shoots Fred nonchalantly as he's working the telegraph machine. The film even shows a fair amount of blood and bullet holes. Compared to a theatrical Western from just eight or 10 years earlier, it's a virtual gore-fest.

As the title foreshadows, there's a hanging in this film after the intrepid posse finally catches up with Porter. It doesn't go down like anyone thinks. The brothers argue about whether it's right to hang Porter without a trial, and as they're bickering he takes off on the horse they thought to use for his execution, the untied noose around his neck flapping behind. But then it gets caught in a tree root and his head is snapped backward, essentially hanging himself.

If there's a theme to be had, it's that evil will not dally while the forces of good vie for what justice is best.

I don't mean to pretend that "A Man for Hanging" is any kind of great cinema. It's a cheap, hastily-shot bit of claptrap made for the TV, almost entirely forgotten today. Yet I think it's worth recognizing for being edgier than similar fare you'd see that of that day.

Any TV movie that can get mothers to clap their hands over the eyes of their wee ones and exclaim, "I can't believe this is on television!" can't be all bad.