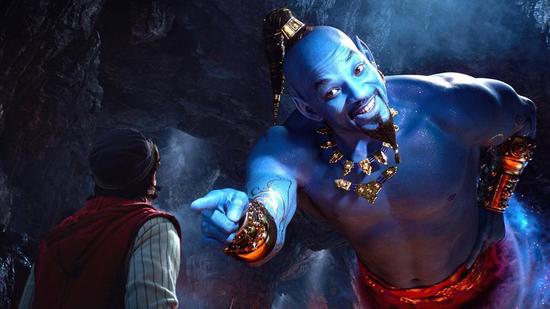 The part we feared most, Will Smith as the genie, actually turns out to be not so bad.

This is Will Smith, after all, an entertainer not without his charms. His genie is goofy and funny and appropriately self-important. The blue CGI body is still a little off. And although he doesn’t make us forget Robin Williams’ manic-yet-slyly-tender voice work in the original animated “Aladdin,” Smith turns out to be an able, updated substitute.

The rest of the cast…

Mena Massoud and Naomi Scott are fine as Aladdin and Princess Jasmine, all a-twinkle and a-dimple as the comely young Arabian couple. (He’s Egyptian and she’s British/Indian, which isn’t too egregiously off by Hollywood standards.) I liked the cartoon version of the sultan as an affable dolt; Navid Negahban seems more haunted than sympathetic.

The big letdown is Jafar, a far fall for one of Disney’s most scrumptious villains.

He had that scarecrow frame and twisty little beard, hooded eyes and a marvelous baritone growl (supplied by Jonathan Freeman). Marwan Kenzari just looks like some guy they plucked out of the street bazaar and put into a vizier’s outfit. Worst of all, his Jafar has a high, almost whiny voice. Not surprisingly, he’s the one character who doesn’t get to do his song from the animated version.

When it comes to screen villains, tenors go home.

You know the story: gold-hearted street rat thief Aladdin (Massoud) falls hard for Jasmine, the princess of Agrabah, who is being courted by a string of foreign princes. After picking up a magical lamp, he summons the big blue genie (Smith) to sorcery him into ersatz royalty, makes a big entrance, and then things go south because of all the lying -- plus those nasty Jafar schemes.

Of all the cartoon movies Disney has turned into a live-action remake, “Aladdin” falls smack in the middle. It’s a bright, fast-paced spectacle that isn’t just a shot-for-shot remake of the original. Director Guy Ritchie, known for turning stodgy Sherlock Holmes into a knife-fighting action star, co-wrote the screenplay with John August.

Some of it works really well. The magic carpet ride to the song “A Whole New World” is still a dazzler, as Aladdin and Jasmine cruise the world and discover love. The entrance of the fictional “Prince Ali” has all the jazz and verve of the original. I appreciated the updating of Jasmine’s character into a strong-willed young woman who doesn’t just resent having the sultan pick her husband, but actually vies to take the sultan’s place.

Other stuff lands with a clunk. Abu the monkey is a little too CGI for his own good. I disliked having Jafar’s henchman, the parrot Iago, relegated to mere dumb beast. The snappy repertoire between the haughty Jafar and his Bronx-cheering, Gilbert Gottfried-voiced pet was the animated film’s main comic engine.

A couple of new songs just plain don’t play. In the oddest one, “Speechless,” Jasmine starts belting while the guards are leading her away, and all her enemies start dissolving into dust a la “Avengers: Infinity War,” and I wondered if she’d suddenly acquired magical powers.

Similarly, a romance contrived for genie and Jasmine’s handmaiden (Nasim Pedrad), falls rather flat. He’s a world-bending cosmic powerhouse -- why he gotta have a dame?

I can’t say as I really wanted a live-action “Aladdin,” but now that it’s here I object to its existence less than I thought I would. My kids enjoyed the heck out of it, and even the stretches that had me sighing with impatience weren’t so interminably long they had me wishing I was somewhere else.