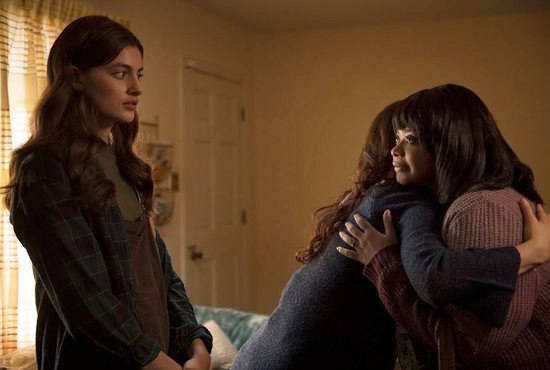 I’d like to humbly suggest a fourth category: obviously trashy movies that are aware of their own trashiness and have fun with it while still not really being all that good.

“Ma” reminds me of lots of bits and pieces of other movies. “Misery,” with a seemingly normal, unappreciated middle-aged woman who’s secretly bonkers and played by an Oscar-caliber actress -- in this case, Octavia Spencer.

“Carrie,” about a teen girl traumatized by her sexual humiliation at the hands of her classmates, which is due for a hard comeuppance. The usual motley assembly of comely teens from every horror movie ever who just want to party.

Spencer is obviously having a lot of fun with this role, playing the kray-kray baddie in a low-budget scare flick. She fake-smiles her way through interactions, passing as normal while staring daggers when backs are turned. She’s not the most physically imposing cinematic killer, but she is good at lulling people in for a good stab in the back.

She plays Sue Ann, a timid teen who grew into a resentful woman. She has a miserable job as an assistant for the world’s nastiest veterinarian (Allison Janney). When a group of teens beg her to buy booze for them, she tuts and frets about nobody drinking and driving, and then relents.

A few winks later and Sue Ann is now hosting a never-ending party in the basement of her house out in the sticks, passing out shots and dancing the night away in an attempt to recapture some of her stolen youth. Insisting the young’uns call her “Ma,” she pokes through their social media and worms her way into their lives.

Diana Silvers plays Maggie, the new kid who has just moved to town from San Diego and immediately falls in with the cool gang. In this rural enclave, that means getting buzzed and hanging out at “the rock piles,” a pasture full of rubble that has been a party spot for decades.

Juliette Lewis plays her mom, Erica, who’s been through some rough days and is working as a cashier at the local casino in hopes of graduating up to dealer. She loves Maggie and gives her too much rope to hang herself with, making noises about “making good choices” but always too busy to check up.

McKaley Miller is Haley, the brazen girl who likes to impress everyone with her brazenness; Corey Fogelmanis is Andy, a sweet-faced boy who makes moony eyes at Maggie; Dante Brown is the funny, smart black kid; Gianni Paolo is Chaz, the headstrong jock.

Luke Evans turns up as Ben, Andy’s dad, though they never have a scene together so we’re just taking the filmmakers’ word for it. Missi Pyle plays his nasty, drinky girlfriend, who knew Erica back in the day.

Actually, it turns out all the adult character knew each other in high school, leading to gauzy flashback scenes with child actors who don’t resemble the grownups in the slightest. Suffice it to say, Sue Ann craved to be part of the in crowd, who just played her off for jokes.

Director Tate Taylor has made some good flicks, including “The Help” and “Get on Up;” screenwriter Scotty Landes is a TV guy doing his first feature film script. Tonally “Ma” is all over the map, spooky edging into scary and passing through comedy along the way. This creates a lot of awkward transition periods where we’re not sure if we’re supposed to be cowering or cackling.

Some stuff just plain doesn’t work, like a shy girl in a wheelchair (Tanyell Waivers) who is tied into the game very late in the going. Without giving too much away, I’ll just say that she and Sue Ann’s relationship deserved a whole movie of its own, or to be cut out of this one.

I can’t really recommend “Ma,” though I did on some level enjoy it. It would be incorrect to say this movie isn’t trying very hard; rather it’s laboring mightily at unworthy things.