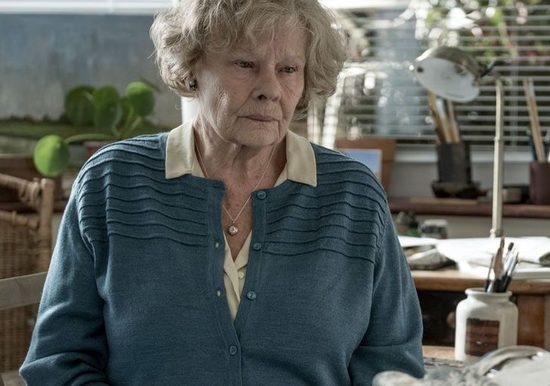 "Who was using who? I was a shadow in a man's world. Invisible... but in the end, powerful."

The "old" Joan in "Red Joan" is played by the incomparable Judi Dench, while the younger version -- who actually has the majority of the screen time -- is portrayed by Sophie Cookson, who reminded me a lot of Midge Wood, the bookworm girl played by Barbara Bel Geddes in "Vertigo."

They're clever, perpetually unappreciated women with obstinate chins who eventually undertake to assert themselves for what they want and the things they believe in. In Joan's case, this means spiriting atomic bomb secrets to the Russians during and after World War II.

"Red Joan" toys around with this fact for its first half, in a somewhat lackluster did-she-or-didn't-she game of storytelling cat-and-mouse. Of course, we know she'll be revealed as a spy in the end, as if common sense and the title of the movie didn't instruct us so.

What I found more interesting was how the Joan of the year 2000 has resolved the inner struggles of her self from 1938 and the years immediately thereafter. The film, written by Lindsay Shapero and directed by Trevor Nunn, depicts young Joan as struggling with the morality of her spying, manipulated by a pair of Russian émigré siblings who pick at her vulnerabilities.

By her 80s, though, Joan has mostly put away this part of her life. When her activities are discovered and investigated, she feigns ignorance before eventually embracing her role in a matter-of-fact way. She reminds her interlocutors that the Allies had promised to share their nuclear research with each other, but the Americans got to the atomic bomb first and quickly shut out the British-Canadian research team and the Russians.

I felt if everyone had the bomb, it was less likely they would use it on each other, she patiently explains to her shocked son (Ben Miles) -- essentially crediting herself as author of the concept of Mutually Assured Destruction.

Even though we know where the movie is going to go, I was intrigued and entertained by the journey getting there. The story is loosely based on that of Melita Norwood, who passed on secrets to the Russians while employed as a secretary.

The Brits' counterpart to the Manhattan Project was codenamed Tube Alloys, which is a very British codename. Stephen Campbell More plays Max, the head of the research team who eventually falls for the much younger Joan.

Her heart, and also much of her head, still resides with Leo (Tom Hughes), the dreamy young Communist firebrand she met during her student days at Cambridge. He has a sort of slouchy charm, doing a lot of side-eye ogling at her through one of those floppy haircuts that falls into his eyes.

His sister, Sonya (Tereza Srbova), is the more subtle of the two, befriending Joan and encouraging her romance with Leo.

There's a lot of subtext about how Joan is denigrated for her gender, constantly being asked to fetch the coffee or run the fancy new clothes dryer when she actually has a degree in physics and is one of the sharpest tacks in the department. She's the first one to suggest a centrifuge to separate the radioactive material isotope thingee.

It's a great-looking film, filled with vintage cars and clothes and street scenes. I also liked Freddie Gaminara as a socialist sympathizer who coasts on his title and privilege.

Dench is terrific as always, though Cookson makes the strongest impression. It's enervating to see a timid young thing blossom and grow in confidence, overcoming adversity even as others vie to bend her to their will. Joan does indeed bend, though more as a result of internal resolve than external pressure.

It's not every spy drama that depicts the traitor as the heroine. But "Red Joan" operates in the shadows of ambiguity and compromises.