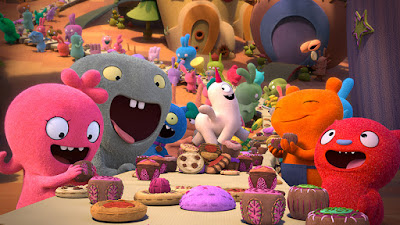 Alas, this based-on-a-toy-line tale doesn't have the verve of the first "The LEGO Movie" or the emotional heart of those Disney toy flicks. It's a pretty standard "finding your own voice" story, directed by Kelly Asbury from a screenplay by Alison Peck, with co-producer Robert Rodriguez contributing the story.

The songs aren't as good as "Sing," standard floaty pop ballads and forgettable upbeat ditties. Clarkson and Monae, who handle the bulk of the singing duty, are wonderful singers but are constrained by the fact their voices and styles are astonishingly alike.

Clarkson is Moxy, a bright pink "ugly" doll with a gappy grin and unidentifiable appendage atop her head. The setup for this world is that every doll is created for a particularly child to love, but some of them get screwed up in the factory and are rerouted to the Uglyville cove, where monster-like creatures with extra (or missing) limbs, eyes, etc. comprising all sorts of shapes get along fabulously.

Moxy is the lone resident who pines to still make it into the "Big World" and receive her assigned child, but this involves going through the training program where the perfect dolls compete and snipe with each other to conform.

Jonas provides the voice of "Lou," the seemingly benevolent leader of the perfect dolls, who has a bright blond pompadour comprised of yellow yarn and a dazzling smile. It's all a front for a very nasty "mean boy" mentality, in which he constantly nitpicks and belittles the other dolls for not shaping up to his standard.

You can take a wild guess where this all ends, with the perfect dolls turning out to be not so perfect and the ugly ones displaying beautiful insides. By that I mean their hearts and souls, not their stuffing. No dolls are in serious danger of being hurt, though there is one scene toward the end that's pretty much lifted straight out of the last Toy Story movie.

Monae is Mandy, one of Lou's henchchicks who has more sympathy for Moxy and her crew, and for good reasons we'll find out later. Blake Shelton plays Ox, the one-eyed bunny mayor of Uglyville. Pitbull does Ugly Dog, Moxy's main wingman, and Wang Leehom is Lucky Bat, the town's resident sage critter.

I found my mind wandering a lot during "UglyDolls," though my 8-year-old was pretty tuned in and entertained. There's no mistaking the downmarket level of creativity in this movie, which feels like the sort of thing you'd get as an original on Amazon Prime Video or Netflix. It'll be there soon enough.

Posted by Christopher Lloyd at 12:58 PM