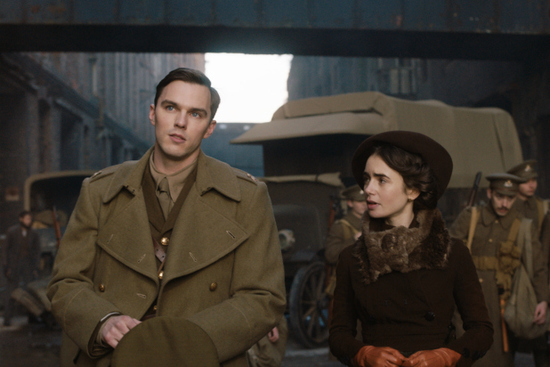 I’m not sure what the recent fascination is for biopics of British authors of fantasy/children’s books. We’ve had not one but two of the “Winnie the Pooh” creator, and now here is “Tolkien,” based on the young life of “The Lord of the Rings” writer J.R.R. Tolkien.

It’s a stately and respectful film that doesn’t reveal any huge insights on John Ronald Reuel Tolkien, played empathetically by Nicholas Hoult -- especially if you already knew how his gruesome experiences in the trenches of World War I shaped his views and writing.

This is one of those rare movies that could’ve stood to be either much longer or much shorter.

There is imagery from the “Rings” saga interspersed throughout the film, flashes of imagination or dream fever where Tolkien sees a fiery Balrog rise from the furnace of the battlefield, or a towering crowned Sauron figure outlined over the twisted bodies of the fallen. The dragon Smaug and even the snowy steed Shadowfax make appearances.

It’s clear this movie would not exist without the success of the “Rings” trilogy and the subsequent (overly sprawling) film adaptation of his earlier novel, “The Hobbit.”

My guess is this movie will appeal more to hardcore fantasy fans who want to see the inspiration behind their beloved stories than a more general audience.

The Tolkien family has apparently objected to the film, no doubt because they were not consulted on its production (and presumably received no remuneration). But it’s a fairly standard  biopic that certainly does not seek to uncover character flaws or hidden secrets.

The film largely focuses on two sets of relationships that defined Tolkien. Orphaned at a young age and awarded a scholarship to a prestigious prep school, Roland (as he was known) at first clashes with and then befriends a trio of upper-crust boys. (They are played by Anthony Boyle, Patrick Gibson and Tom Glynn-Carney in their adult years.)

All are artistically inclined but afraid to reveal their passions to their stodgy parents. In Roland’s case, this means the caring but strict priest (Colm Meany) who acts as his legal guardian.

Dubbing themselves the Tea Club and Barrovian Society, or TCBS, they spend their years at the Barrons shop exchanging poetry and musical inspiration. When all four enlist in the military upon the advent of war, it sets up a series of expected, but still devastating tragedies.

The other significant piece of the tale is his romance with Edith Bratt (Lily Collins), who came to live at the same boarding house where Roland and his younger brother (who’s not given much of a presence) were assigned. She is a piano prodigy who feels hampered by her lack of opportunities, and the pair soon begin a furtive courtship.

The main story is framed by a war sequence in which Roland sets out on a quest to find one of his school days chums, fearing for his safety. Wracked with fever, he is accompanied by a diminutive but stout junior officer named Sam (Craig Roberts), and it’s hard to miss the reference to Frodo’s journey to Mount Doom with a loyal lackey in tow.

It’s also interesting to see how Tolkien was building the little pieces that would become Middle Earth going back to his childhood, with drawings and snippets of stories festooning his walls and cramming his desk. This is a man who created his own languages, and then used them to weave a mythology as vast and intricate as anything by the Greek or Chinese.

I’m not sure if “Tolkien” unearths any tremendous understanding of the author’s life, other than he was a diligent, talented loner who was shaped equally by tragedy and fellowship.

I’m personally skeptical of the idiom that you have to suffer in order to be a great artist, but here is a man who would not have sprung forth an entire world without experiencing the darkest hells of this one.