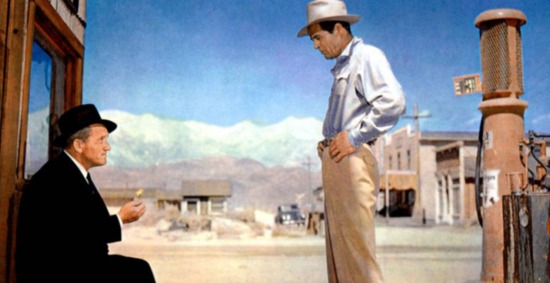 There are no close-ups in "Bad Day at Black Rock," a film that deliberately keeps the characters at arm's length. Close-ups are sustenance to most film actors, who feel like mannequins put through their paces unless they get a chance to scowl and sob and seethe and otherwise use their marvelous faces to their full effect.

I imagine that acting in this film was like being on a forced diet.

"Bad Day" could be best described as a film noir Western. Director John Sturges started as an editor, then directed a lot of B-pictures until he broke into the A-list with this movie. He would go on to make "The Magnificent Seven," "The Great Escape" and "The Old Man and the Sea," among others.

The film has a very painterly quality, wide vistas filling in the backdrop as characters saunter and interact in the foreground. It's filled with bright desert colors, deep blues and browns, except for the main character who is a slab of black, like a null space in the middle of the frame.

Even if you haven't seen "Bad Day" you're probably aware of the premise. A one-armed stranger gets off a train in the middle of nowhere, a collection of a few shanties collectively known as Black Rock. It is the first time the train has stopped here in four years. His presence provokes strong resentment and suspicion among the townsfolk, especially after the newcomer starts poking around asking questions.

He doesn't say very much about himself, only giving his name -- John J. Macreedy -- and inquiring about the whereabouts of a local Japanese-American farmer named Komoko with whom he apparently has some business. The cowboys insist Komoko was interned at the start of World War II, and no one's heard from him since.

As the story takes place it is late 1945, a few months after the war has ended. We eventually learn that Macreedy has just mustered out of the Army, losing the use of his arm in Italy. And that, despite the loss of his limb, he's more than a match for any headstrong cowpunchers. They foolishly take his retiring ways as cowardice.

"I believe a man is as big as what'll make him mad. Nobody around here seems big enough to get you mad," observes Smith (Robert Ryan), a rancher who seems to have everyone quietly under his grip.

Macreedy is played by Spencer Tracy, who didn't particularly want to be in the movie and for people who didn't especially want him in it, either.

Millard Kaufman, who wrote the screenplay from an adaptation by Don McGuire based on a short story by Howard Breslin, thought Tracy was far too old to play an Army platoon commander. Tracy, then in his mid-50s and struggling badly with alcoholism that made him appear much older, had to be cajoled and threatened and finally fooled -- by the assurance that Alan Ladd was ready to step into the role -- before finally committing to play in it.

It's quite obvious that Tracy still has his left arm and is just tucking it into his suit pocket. Interestingly, nobody in the movie actually refers to Macreedy as missing his arm, though every description ever written about the movie contains that description. In one exchange two men opine about the stranger's "stiff arm" and if he's hiding something in his pocket, like booze or TNT.

Coley Trimble, the most antagonistic of the locals played by Ernest Borgnine, does accuse Macreedy of endangering the roads with his "one-armed driving," though that's a quibble as you can drive with one arm despite having two. This after intentionally running Macreedy off the road in the Jeep he had rented from the local gas station, run by the town's only female, Liz Worth (Anne Francis).

When he returns to town, Macreedy is accosted by Coley for his poor driving, and even offers to pay for the damages to the other man's car. It seems that nothing will rile up this odd duck of a stranger.

Except, of course, something eventually does. It appears Macreedy is finally ready to give up on his mysterious mission, gaining the help of the local veterinarian/mortician, Doc Velie (the inimitable Walter Brennan), who offers the stranger the use of his old hearse. In the meantime, Smith has leaned on Liz, so no more Jeep rentals are available.

Hector (Lee Marvin), the most mean-spirited of the cowboys, rips out the distributor cap and spark plug wires, stranding Macreedy. It seems he has asked one question too many and they're planning to off him when night comes.

Little do they know, the unarmed one-armed man in black has them right where he wants them. And now he's find a purpose in life that had been missing.

It would be interesting to see what this movie would look like if it was made today. No doubt it would quickly dissolve into a bloody shoot-em-up or broken bones melee. But other than Macreedy taking out the beefy Coley with some karate chops and flips, there really isn't much violence.

The film wound up turning a healthy profit and earning three Oscar nominations: for Sturges, Tracy and Kaufman.

Even at a quick 81-minute run time, "Bad Day" has an almost languid pace to it as the tension gradually builds and builds. The screenplay drops hints and forebodings, and we're able to figure things out long before the characters speak the words: Komoko was killed and his farm burned to the ground, and the entire town has been keeping this dark secret ever since.

In a way, it's as if all life stopped at Black Rock that day four years earlier, and everyone's just been waiting around for someone like Macreedy to show up. The secret has become their purpose for existence.

Other notable players include Dean Jagger as Tim Horn, the drunken sheriff who has lost all his grit; John Ericson as Pete Wirth, Liz' weakling, pompadoured brother who runs the local hotel; Russell Collins as Hastings, the timid telegraph and train station man; and Walter Sande as Sam, owner of the local diner who delivers one of the film's most remembered exchanges of dialogue in a strangled honk of a voice:

"Bad Day at Black Rock" is short on story but long on mood and themes half-buried in the desert dust. It has the feeling of something both ancient and modern, as the last vestiges of the Old West resist an intruder it feels has no business there.

The town is a piece of history, trapped in amber and looking very much the same as it ever did, even though its heart died a long time ago. The ending has a hopeful note, that evil will be punished and Black Rock can start to heal. But my guess is Macreedy's was the last train stop before the tumbleweeds took over.