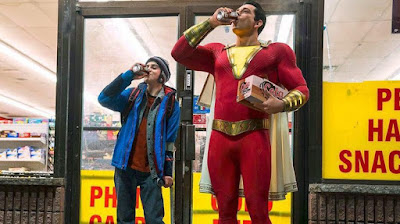 The DC superhero cinematic universe seems to be perpetually five to eight years behind the Marvel one. That’s when the MCU went into full-on comedy mode with “Guardians of the Galaxy.”

“Shazam!” appears to be the DC reaction, a yuk-it-up aimed squarely at older kids and teens.

It’s basically a remake of “Big,” with the protagonist as a cape-wearing do-gooder instead of a toy company executive. Asher Angel plays Billy Batson, a troubled 14-year-old who stumbles upon an ancient wizard and is granted the powers of Shazam.

When he says that word, he is transformed into a musclebound adult wearing a red-white-and-gold costume, played by Zachary Levi in a (obvious) padded suit. His powers are basically Superman Lite: strength, bullet-proof and flight – though it takes Billy a little longer to figure this last part out. He can even shoot electrical bolts from his hands.

His wingman is Freddy (Jack Dylan Grazer), a smart kid on crutches who knows the superhero shtick better than Billy and tutors him on how to act the part. They quibble over alias names – Red Cyclone and Minster Philadelphia among the offerings –work on becoming YouTube stars, and eventually fight some evil.

Mark Strong plays the villain, Dr. Sivana, who has spent his entire life seeking the power of Shazam only to have it fall into another’s hands. Billy and Freddy, who live in a foster home, later recruit some of their fellow orphans to form a super-team, since that seems to be the thing these days.

Think about it: Marvel launches Iron Man, Captain America and Thor in solo movies, brings them together into groups, then cycles out the veterans and features newbies (Doctor Strange, Black Panther, Spider-Man) in their own flicks, and the cycle repeats. Ditto DC’s Superman, Wonder Woman et al.

I’m not sure if we’ll be seeing Shazam as a member of the Justice League anytime soon. But his goofy quips next to Batman’s nonstop brooding would be interesting.

Video extras are pretty good. There is a gag reel, deleted scenes, an exclusive motion comic and the following documentary shorts:
Movie: